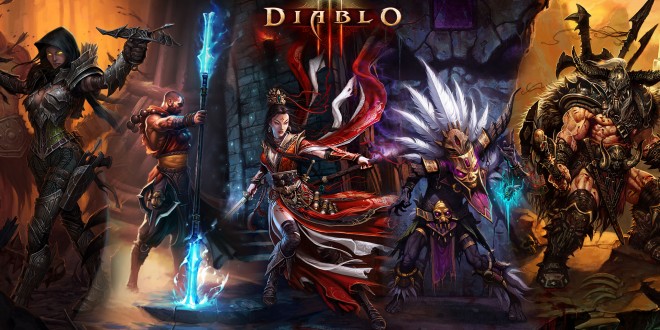 The days of buying and selling items in Diablo 3 are now officially over. Blizzard has long made its decision to remove the controversial trading platform public, and has been preparing for the big change for awhile now. Following the extremely popular and successful 2.0.1 patch for Diablo 3, the auction house has now been removed entirely. Frankly, it’s a good thing too. With the changes to the loot system, Diablo 3 feels like a new game, and the Auction House is no longer a necessary key. Up until now, players were somehow forced to buy and sell items (either for real money or in-game currency) in order to get the best out of their characters and manage the rougher challenges of the game.

This has now changed. The latest patch prepares Diablo 3 for the arrival of its first major expansion, Reaper of Souls. Reaper of Souls is arriving at the end of this month, and the base-game now seems entirely ready for the change. The difficulty settings and modes have been reworked, Paragon levels have been entirely redone, and loot now drops tailored to your class. The chances of actually finding useful Legendary items in Diablo 3 are actually decent now, and when you do find a rare item, it’s most likely to fit your class perfectly. Gone are the days of finding great Barbarian gear as a Witch Doctor, gear that you had no choice but to sell via the Auction House. Overall, Diablo 3 feels like an entirely different game now, and in the good sense. A lot of hardcore fans are returning to the game, and Blizzard seems to finally be taking Diablo 3 in the right direction.

Expect even more positive changes with Reaper of Souls, an expansion that brings the Crusader class to Diablo 3. This class is similar to Diablo 2’s paladin, both in style and skills. In fact, Reaper of Souls seems to be doing the same Lord of Destruction had done for Diablo 2 – transform a good but flawed concept into a jewel of a game. Diablo 3 is currently on sale to celebrate the expansion’s release, with a 45% discount from its original price. If you’re interested in getting back to Diablo 3 (or picking it up for the first time), now’s the perfect time to do it. Diablo 3: Reaper of Souls is due for release next week.

I’m Load The Game’s co-founder and community manager, and whenever I’m not answering questions on social media platforms, I spend my time digging up the latest news and rumors and writing them up. That’s not to say I’m all work and no fun, not at all. If my spare time allows it, I like to engage in some good old fashioned online carnage. If it’s an MMO with swords and lots of PvP, I’m most likely in it. Oh, and if you’re looking to pick a fight in Tekken or Mortal Kombat, I’ll be more than happy to assist! Connect with me by email markjudge (@) loadthegame.com only
@@MarkJudgeLTG
Previous Risen 3: Titan Lords officially announced
Next When does Spring start?

It’s always nice to sit down and relax with a quality game. Even better when ...