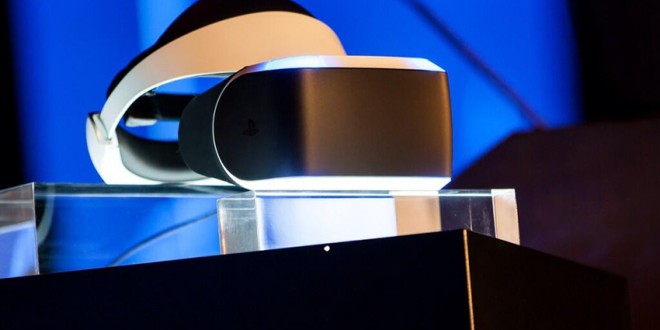 After many months of rumors of speculation , Sony has formally announced Project Morpheus, a virtual reality device for the PlayStation 4. We retreated the images of the head mounted display from the GDC 2014 presentation in San Francisco, which features a white visor with a black wrap-around piece along the eye-line. The PS4 VR Headset prototype will be be available to developers soon.

During the presentation, the president of Sony Computer Entertainment Worldwide Studios, Shuhei Yoshida explained that virtual reality may well shape the future in games by increasing emotion and adding a sense of presence while playing. Yoshida showed the early developments of the VR Headset with a Playstation literally duct-taped to a prototype.

“We believe the Morpheus will further enhance the world of PlayStation 4 with seamless integration with PlayStation Camera, DualShock 4 and PlayStation Move.” said Shuhei Yoshida. Dr. Richard Marx, senior director of research and development at Sony, was quick to point out that Project Morpheus’ VR capabilities won’t be limited just to games. One of the projects Marx is currently working on involves a virtual walk on the surface of Mars, in partnership with NASA. According to Marx, Sony’s Six Principles of VR are :

Marx believes Sony has an advantage in the sight and sound department, thanks to its existing expertise in the high definition displays and audio. Tracking for the Morpheus can be handled by the PlayStation Move technology in addition to the PlayStation Camera, and will take advantage of the DualShock 4 sensors and glowing light. Marx mentioned that Sony intends for the Morpheus to be easy to use, without any complicated setups involved.

Sony’s decision to focus on Virtual Reality is an extremely well-received one. Gamers have been looking forward to VR technology solely on the PC so far, with the Oculus Rift holding some sort of monopoly. Sony aims to change that, bringing the VR to its popular gaming console, the Playstation 4. It will be interesting how Microsoft will react and adapt to these developments, considering that so far there have been no hints at anything remotely close being developed for the Xbox One. To stay competitive, Microsoft will need to come up with something big and fast. While still in a prototype-phase, the Project Morpheus should see light of day within one or two years. We’ll have to monitor the project closely, and we’re extremely curious about both the pricing of the new console VR technology, as well as the games that will be developed for this game-changing tech.

I’m Load The Game’s co-founder and community manager, and whenever I’m not answering questions on social media platforms, I spend my time digging up the latest news and rumors and writing them up. That’s not to say I’m all work and no fun, not at all. If my spare time allows it, I like to engage in some good old fashioned online carnage. If it’s an MMO with swords and lots of PvP, I’m most likely in it. Oh, and if you’re looking to pick a fight in Tekken or Mortal Kombat, I’ll be more than happy to assist! Connect with me by email markjudge (@) loadthegame.com only
@@MarkJudgeLTG
Previous New Star Wars The Old Republic expansion Galactic Stronghold revealed
Next Upcoming Amazon gaming controller revealed