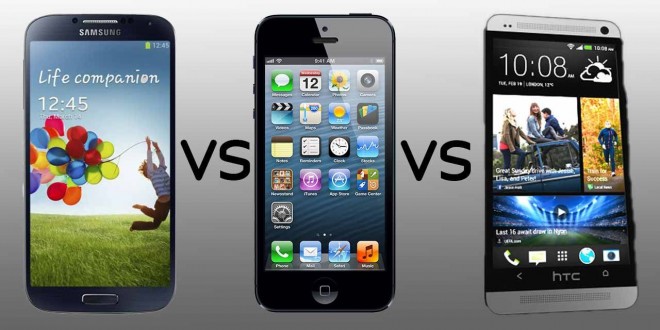 With so many top brands releasing new phones in this period, we’re comparing the Apple iPhone 5S, the HTC One M8 and the Samsung Galaxy S5 to try and help with the shopping choices!

The HTC One M8 (or the HTC One 2, if you prefer) is one stunning looking phone. It’s HTC’s flagship phone for the season, aimed to compete with the likes for the Samsung Galaxy S5, Apple iPhone 5S or Sony Xperia Z2. Does it improve over its predecessor, the HTC One? Most certainly, in many regards. It’s a top-tier phone with some great specs and a hefty price to go along with it. The HTC One M8 costs around $700-750, or  £550 in the UK. That’s not exactly cheap, by any standards.

Still, there are a lot of things the HTC One M8 offers in return for the hefty price-tag. First of all, it has a great 5 inch display that provides insanely good color accuracy and visual quality. The 441 PPI speaks for intself. Then, you get a more than decent camera and pretty-much top of the line hardware, with a Quad-Core 2.3 GHz Snapdragon CPU. With 2 GB RAM and storage options of up to 128 GB, the HTC One M8 should satisfy all expectations when it comes to what’s under the hood, while managing to look great.

Apple’s iPhone 5S is the latest iPhone on the market, and will only be replaced later this year by the upcoming iPhone 6. It’s not as powerful hardware-wise as the Samsung Galaxy S5 or the HTC One M8, but it certainly holds its own, and thanks to the great iOS 7 support, it runs smoothly and quickly. The iPhone 5 has a much smaller disply with a lower resolution and only 4 inches in size, but in typical Apple fashion, it still manages to look great.

The iPhone 5S suffers a bit on the hardware-side when compared to the competition, but this doesn’t make the phone bad. Unfortunately, it’s a costly phone, so if you’re interested in specs alone, the iPhone 5S certainly doesn’t provide a good value factor. The Apple iPhone 5 is also priced at around $700-750, or  £550 in the UK, making it an equal to the HTC One M8. What it lacks in hardware, it makes up for in build quality and design, especially if you’re an iPhone fan. There’s nothing revolutionary here, you know what to expect from an Apple phone. That being said, good battery life, a great camera and good storage options make the iPhone 5S a solid choice if you want an iOS-based phone.

The Samsung Galaxy S5 just came out, and it successfully succeeds Samsung’s Galaxy S4. Unfortunately, its design didn’t get pumped up enough to make it an attractive phone, albeit it’s not really ugly either. It’s just bland and mediocre, not standing out from the crowd at all. The HTC One M8 or iPhone 5S are definitely better looking phones. However, the Samsung Galaxy S5 brings an insanely good 5.1 inch display to the table, and it simply is the best out of the three phones. You’re left wanting for nothings with the Galaxy S4’s screen.

Hardware-wise, we get a Quad-Core 2.5 GHz Snapdragon CPU that flies. Unfortunately, RAM and storage aren’t on par, but the Samsung Galaxy S5 still manages to perform well, especially because of a greatly refined Android OS. The camera is great, but not as easy to use as the iPhone 5S’. When it comes to price, the Samsung Galaxy S5 is at the same level with the HTC One M8 or iPhone 5S, costing around  £540 or $650-700, carrier-free. With a powerful CPU, a great display and features such as waterproofing, the Samsung Galaxy S5 is certainly a worthy contender.

Out of the bunch, we’d pick the HTC One M8, simply because it combines everything successfully when compared to the competition. The Apple iPhone 5S lacks hardware but has great design features, the Samsung Galaxy S5 has the hardware but lacks design. The HTC One M8 has both, and since the phones cost pretty much the same, becomes a winner in terms of value, price and overall appeal.

I’m Load The Game’s co-founder and community manager, and whenever I’m not answering questions on social media platforms, I spend my time digging up the latest news and rumors and writing them up. That’s not to say I’m all work and no fun, not at all. If my spare time allows it, I like to engage in some good old fashioned online carnage. If it’s an MMO with swords and lots of PvP, I’m most likely in it. Oh, and if you’re looking to pick a fight in Tekken or Mortal Kombat, I’ll be more than happy to assist! Connect with me by email markjudge (@) loadthegame.com only
@@MarkJudgeLTG
Previous Metro 2033 and Last Light coming to PS4 and Xbox One
Next PS Plus vs Games with Gold – April Free Games