Breaking News
Home » Tech » HTC One M8 vs HTC One – New vs Old, Top-tier vs Affordable 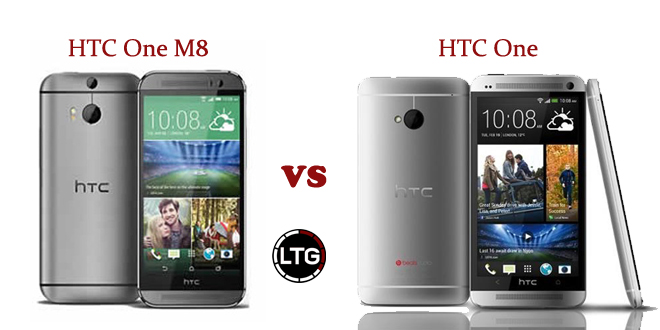 HTC One M8 vs HTC One

HTC One M8 vs HTC One – New vs Old, Top-tier vs Affordable

HTC released an extremely popular and well-built phone last year in the form of the HTC One. It followed up on the model’s success this year, releasing an improved sequel, called the HTC One M8. It’s fresh out of the oven, and while the name certainly didn’t improve, the phone supposedly did. How much so, though? Is the HTC One M8 a significantly better phone that warrants a chance or an upgrade?

The HTC One made a name for itself by bringing really great hardware and combining it with an impeccable design and a quality display. In fact, the HTC One has one of the best displays among last year’s smartphones, suffering only from a diminished viewing capability if viewed in sunlight and from an angle. The HTC One also comes with generous internal storage, although it lacks a microSD slot, which can be a significant minus.

The build-quality and design of the HTC One made it a popular choice, the phone pulling off some stunning looks with its aluminium brush finish. It still looks great compared to today’s offerings, and is relatively light and small considering what it offers and how solid it feels. The apparent 4 MP camera might seem week, but the optical image stabilization sensor and the ultra pixel technology can surprise many. It’s a solid camera, within a solid phone.

When it comes to hardware, the Snapdragon 600 CPU is slightly out-dated, but at the time of release, the HTC One was a top-runner. It still runs everything well enough today, but the appearance of the Snapdragon 800 generation makes it seem a little bit weak. 2 GB of RAM are nice however, with even the newest of smartphones (like the Samsung Galaxy S5) having the same.

The HTC One M8 is an improvement on almost all fronts when compared to its older counterpart. The design remained just as good, in fact, it was improved upon. HTC refined the edges making the phone that much more elegant and good-looking. The display is similar – it lost some PPI but gained size. It does slightly better at angular viewing, but it still isn’t great in that regard. Despite that, accurate colors and great brightness make the HTC One M8’s screen a really good one.

Hardware has been upgraded significantly too. The old Snapdragon 600 CPU was replaced with a Snapdragon 801 quad-core CPU which performs admirably. RAM remained unchanged, with 2 GB of ram powering the HTC One M8. The smartphone now has external storage options of up to 128 GB, but has lost on the internal storage side. Unfortunately, the camera lost its OIS feature, which is a shame. Other than that, the sensor in itself has been upgraded, but without the OIS technology, it’s harder to take really good pictures.

Is the HTC One M8 a significant upgrade?

Oh, most certainly. Many of the original HTC One’s features have been improved upon, although it’s a shame to see the OIS go. Hardware is better though, the display is just as good (if not better due to sheer size), the design has been refined and microSD support has been added. Overall, the HTC One M8 has improved enough to be a competitive force once again this year. However, last year’s HTC One can be picked up for under $500 now, while the HTC One M8 is more expensive at around $650-700. The difference is justified, and for what you pay extra, you get extra. It all comes down to your pocket’s depth. If you can afford it, pick up the new HTC One M8. Otherwise, go with the old HTC One, it won’t let you down either.

I’m Load The Game’s co-founder and community manager, and whenever I’m not answering questions on social media platforms, I spend my time digging up the latest news and rumors and writing them up. That’s not to say I’m all work and no fun, not at all. If my spare time allows it, I like to engage in some good old fashioned online carnage. If it’s an MMO with swords and lots of PvP, I’m most likely in it. Oh, and if you’re looking to pick a fight in Tekken or Mortal Kombat, I’ll be more than happy to assist! Connect with me by email markjudge (@) loadthegame.com only
@@MarkJudgeLTG
Previous New footage for Watch Dogs coming at Pax East, release date revealed
Next Fire TV: Amazon competes with Apple and Google