Breaking News
Home » ARTICLES » Xbox One or PS4? Sheldon from The Big Bang Theory might help you decide 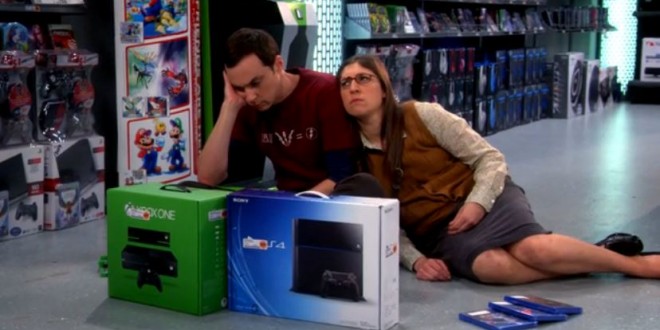 Xbox One or PS4? Sheldon from The Big Bang Theory might help you decide

If you’re still in doubt about which next-gen console to buy don’t worry, The Big Bang Theory might help you out. During the latest episode of the popular TV series, main protagonist Sheldon Cooper is faced with the very same dilemma many console-war adepts have been debating over.

The Indecision Amalgamation is the name of the episode, in which Sheldon needs to make the tough decision between the Xbox One and the PS4. Why not both you ask? Well, unfortunately it seems that his TV entertainment center only has space for one console.

The show is well known for its focus on science and technology and given the fact that Sheldon provides solid pros and cons for both the PS4 and the Xbox One, it may indeed help you decide which one of the next-gen consoles to buy. Now, I’m not saying you that should make you purchase based entirely on one episode of The Big Bang Theory, but it could assist with your decision just a bit.

After the episode came out, even Microsoft joined in on the action by posting the following tweet:

I don’t want to spoil Sheldon’s decision so if you’re interested in the outcome oh his dilemma take a peek at the hilarious clip below. The video features all the Xbox One vs PS4 scenes.

I’m Load The Game’s co-founder and community manager, and whenever I’m not answering questions on social media platforms, I spend my time digging up the latest news and rumors and writing them up. That’s not to say I’m all work and no fun, not at all. If my spare time allows it, I like to engage in some good old fashioned online carnage. If it’s an MMO with swords and lots of PvP, I’m most likely in it. Oh, and if you’re looking to pick a fight in Tekken or Mortal Kombat, I’ll be more than happy to assist! Connect with me by email markjudge (@) loadthegame.com only
@@MarkJudgeLTG
Previous Samsung achieves breakthrough with Graphene
Next Tickets for The International 2014 DOTA 2 event sold out within an hour