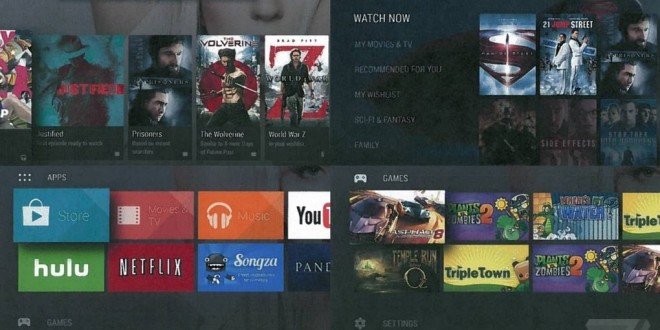 A few days after Amazon launched its device, the Fire TV, Google is launching a new television platform called Android TV, according to documents obtained by The Verge. Android TV is described as sharing more in common with set boxes like Apple TV and Amazon’s Fire TV. The device will be compatible with gaming, and come with an optional gaming controller.

Google’s developers will create TV apps for a simple set-top-box interface, said to be a set of scrolling “cards” that represent movies, television shows and games, so users will be able to resume content on their television, even if they first started on a mobile device or tablet.

A Google document states that Android TV has a remote control featuring a four-way directional pad to scroll through cards and view recommendations. It includes voice input support and notifications and that access to content should never take more than three clicks or gestures from the homescreen to the new content.

“Access to content should be simple and magical.” The same documents state that Google plans to remove features like cameras, touchscreen support and near-field communication, so that the developers follow through on Google’s well known philosophy of simplicity.

“Android TV is an entertainment interface, not a computing platform,” the document also said. “It’s all about finding and enjoying content with the least amount of friction.” It will be “cinematic, fun, fluid, and fast.”

The company requests a number of app developers to create both apps and games for the new platform. Apps including Google’s own Play Movies, YouTube and Google Hangouts, as well as apps like Vevo, Netflix, Hulu, Pandora and games.

The platform will be designed to outpace competitors like the Fire TV, Apple TV and Roku in performance: The 0.7-inch-thick box features a 1.7 GHz quad-core Qualcomm Krait 300 CPU, 2 GB of RAM and 8 GB of internal storage, as well as a Qualcomm Adreno 320 GPU, a dual-band wireless radio and two antennas for 1080p streaming over 802.11a/b/g/n Wi-Fi.

Rumors say that Google is developing an Android-powered gaming console earlier this year. Besides that, an internet-connected wristwatch, a device that will be released this fall, designed to compete with Apple. Google apparently believes Apple may release a console component with its next Apple TV as well as a watch. Google already dominates with its search engine and Android mobile operating system. It’s only normal, and also ambitious, for the company to try to keep all mobile communications within its ecosystem.

I’m Load The Game’s co-founder and community manager, and whenever I’m not answering questions on social media platforms, I spend my time digging up the latest news and rumors and writing them up. That’s not to say I’m all work and no fun, not at all. If my spare time allows it, I like to engage in some good old fashioned online carnage. If it’s an MMO with swords and lots of PvP, I’m most likely in it. Oh, and if you’re looking to pick a fight in Tekken or Mortal Kombat, I’ll be more than happy to assist! Connect with me by email markjudge (@) loadthegame.com only
@@MarkJudgeLTG
Previous New Borderlands ‘ Pre-sequel ‘ rumored to come out to PS3, Xbox 360 and PC
Next Elder Scrolls Online gets a new trailer to celebrate its successful launch