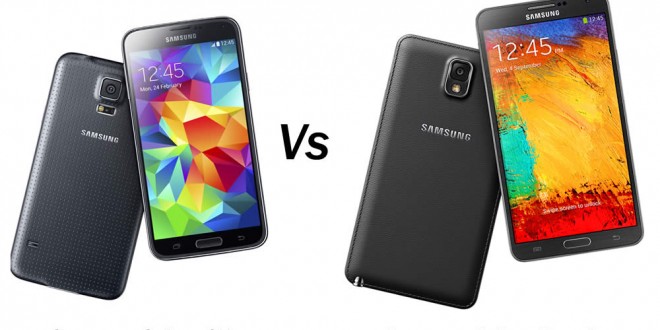 Choosing between these two smartphones will prove to be quite difficult as they aren’t very different from each other. Both devices run the latest version of Android and they are quite similar in regards to their sizes and features. But let’s assume you can only afford one of them. Let’s see if we can help you decide which one is better.

Released just a short while ago, the S5 is Samsung’s latest flagship smartphone. The device is built with functionality and performance in mind. As a result, design-wise it doesn’t differ that much from its predecessor. The company has decided to stick to their guns again when it comes to the materials used. Although the phone is made of plastic, it’s surprisingly durable and pleasant to the touch. Furthermore, it’s also waterproof which means you don’t have to worry about using it when it’s raining or while you’re taking a shower.

As I already mentioned, the Galaxy S5 was designed to have more of a utilitarian purpose and in that respect it does its job well.  The phone comes with a beautiful 5.1 inch SuperAMOLED display that’s bright enough to display text even when using it outdoors. With features like Fingerprint Scanner and Heart Rate Monitor this smartphone can be used for much more than just calling or texting.

When it comes to Android phones this seems to be one of the best out there. The problem with the S5 is that it doesn’t try to innovate so I’m not sure I would recommend it over something like the HTC One or the Xperia Z2. Nevertheless, it’s a solid smartphone that performs well and is clearly an upgrade over the S4.

The Note 3 is considered by many to be the best in its category. With an imposing 5.7 inch display, it’s sure to capture your attention and the attention of all those around you as well. The sharpness of the display is quite impressive for a device of this size and it’s all thanks to the 1920×1080 HD resolution.

Samsung has gone all out when it comes to connectivity options for the Galaxy Note 3. This includes dual-band Wi-Fi capabilities with Wi-Fi Direct and Wi-Fi Hotspot, and connectivity to Wi-Fi networks is very reliable. There’s also DLNA, Bluetooth 4.0, NFC, GPS, microUSB and MHL TV-Out.  Many of its features are similar to the S5 but there is one major difference which stands out: the S Pen. Combined with the S Note, the S Pen can take full advantage of the device’s large display.

The Note series are responsible for the creation of a new category of smartphones, the phablets and the Galaxy Note 3 is the best one so far. Its advantages can be a drawback too however, as some people might find the oversized phone to be uncomfortable while handling. If you’re considering buying it, know that the Galaxy Note 3 is literally and figuratively intended for people with big pockets and it can be pretty expensive.

Each smartphone has certain advantages over the other. The Note 3 will mostly interest people who want a bigger display, longer battery life and can take advantage of the S Pen. The phablet is also generally more expensive unless you can find a good deal somewhere, so keep that in mind.  The Galaxy S5 on the other hand is more versatile as it offers a wider variety of features. The display, although smaller in size, is more power efficient and offers more detailed images. The two are very similar as I’ve mentioned before but if I had to choose, I would probably go with the Galaxy S5. Sure, the display is a bit smaller and the battery lasts a bit less but aside from that it’s better in almost every other day.

I’m Load The Game’s co-founder and community manager, and whenever I’m not answering questions on social media platforms, I spend my time digging up the latest news and rumors and writing them up. That’s not to say I’m all work and no fun, not at all. If my spare time allows it, I like to engage in some good old fashioned online carnage. If it’s an MMO with swords and lots of PvP, I’m most likely in it. Oh, and if you’re looking to pick a fight in Tekken or Mortal Kombat, I’ll be more than happy to assist! Connect with me by email markjudge (@) loadthegame.com only
@@MarkJudgeLTG
Previous Instagram aims for the top with Instagram for PC
Next Assassin’s Creed 5 details leaked from parkour artists working on the game