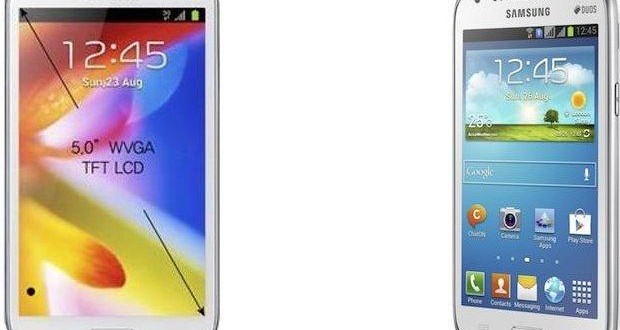 Released in 2013, these two might sound a bit old but they have something special compared to their newer brothers, mainly Dual SIM capability. If you are interested in buying a quality dual SIM device these two might fit the bill. But which one is the best? Take a look bellow.

Released in early 2013 the Grand Duos is still a well made smartphone. With its 5-inch display at 800 x 400 pixels and 187ppi pixel density, Samsung tried to provide an experience similar to the S4 but at a lower price. The Grand Duos runs on an Android 4.2.2 that fits perfectly with its hardware capabilities. With modest specs the Duos is equipped with a 1.2Ghz Cortex A9 dual-core processor, 1GB RAM and 8GB internal storage (4GB user available).

It provides an 8-megapixel camera with image stabilization, face and smile detection. It can also record videos in full HD resolution. It also has a decent 2-megapixel front camera. The Samsung Galaxy Grand Duos offers Bluetooth 4.0, Wi-Fi and DLNA connectivity. Thanks to its HSDPA connection it can reach download speeds of up to 21 Mb/s. Not bad at all, considering the Galaxy Grand Duos is a budget solution.

The Core was released in June 2013, and it is very similar to the Grand Duos. It has a Snapdragon S4 chipset with a 1.2Ghz Dual-core processor, 1 GB of memory, 8Gb internal memory and an Adreno 203 GPU. Samsung offered no update for the Core so it still runs the old Android 4.1.2 which might sound a bit outdated. Having only a 5-megapixel main and VGA secondary camera the Core might be considered a bit inferior when compared to devices from its category. As far as connectivity is concerned, the Samsung Galaxy Core offers micro USB 2.0, Wi-Fi, GPS and Bluetooth 3.0

Tech enthusiast and RPG gamer, I've been surrounded by technology and PC hardware my entire life. I'm fascinated by anything mobile, and when I'm not tinkering with some newly released gadget, I love to immerse myself in the epic tales of Role Playing Games.
Previous Oculus Rift helps dying woman ‘walk outside’ again
Next Samsung Galaxy S5 costs around $256 to build according to market analyst