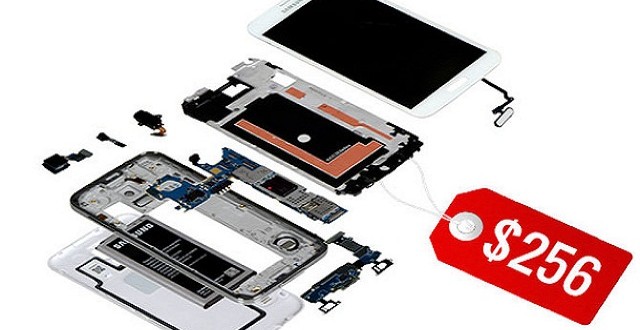 According to Andrew Rassweiler, analyst at market research firm IHS, the Samsung Galaxy S5 costs somewhere around $256 to build. The latest smartphone in the Galaxy S series was released just a while ago but it is already considered one of the best devices around. The secret to the S5 isn’t innovation, it’s evolution as Andrew himself pointed out: “There’s no breakthroughs, there’s nothing earth-shattering. It’s really just a continuation of what has come before.”

If you plan on buying the smartphone on contract it will cost you around 200$, while a no strings attached Galaxy S5 sells for about $660. This means that Samsung gets about 60% of the profits for each device sold without a contract. “Inside we see mostly a lot of recycled components that we’ve seen before. There’s really nothing special inside where Samsung is pushing the envelope” says Andrew. So let’s take a closer look then at some of the components and their costs.

The most expensive component seems to be the smartphone’s 5.1-inch Super AMOLED display which costs around $63 according to IHS. Next, we have the DDR3 RAM and flash memory chips which combined cost about $33. Last but not least we have two of the most noticeable features available to the Samsung Galaxy S5. The swipe fingerprint sensor only costs about $4 which is much cheaper than the $15 static fingerprint sensor that the iPhone 5 uses. The Maxim heart rate monitor costs just $1.45, Andrew also adds that “if there’s a winning supplier with this phone, it’s Maxim”.

The bill of materials only includes hardware and the estimated cost of assembly, which is somewhere around $5 according to IHS. The costs of software development, distribution and marketing are not taken into account. Rasswiler also mentioned that lately the IHS is noticing a certain trend with Samsung made smartphones: “Our main takeaway is that Samsung has been moved up to the higher end of the cost spectrum. It used to be that its typical flagship phone sold for $600 without a contract and had a bill of materials of about $200, now they’re inching up above $250 regularly.”

I’m Load The Game’s co-founder and community manager, and whenever I’m not answering questions on social media platforms, I spend my time digging up the latest news and rumors and writing them up. That’s not to say I’m all work and no fun, not at all. If my spare time allows it, I like to engage in some good old fashioned online carnage. If it’s an MMO with swords and lots of PvP, I’m most likely in it. Oh, and if you’re looking to pick a fight in Tekken or Mortal Kombat, I’ll be more than happy to assist! Connect with me by email markjudge (@) loadthegame.com only
@@MarkJudgeLTG
Previous Samsung Galaxy Grand Duos vs. Samsung Galaxy Core – Price and Specs comparison
Next Candy Crush Saga – CandySwipe dispute settled peacefully