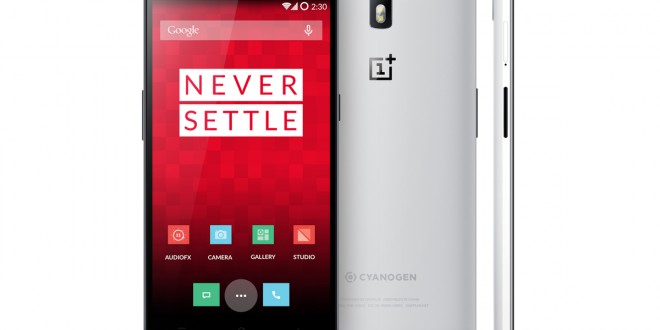 After many months filled with rumors and anticipation, OnePlus finally announced the One, its first Android smartphone. OnePlus struggled a lot to build their first smartphone, encountering obstacles at every step. Their first challenge was to choose the right material for the One, and using stainless steel and aluminum resulted in a smartphone weighing 198g and that was simply unwanted. Then they tried magnesium for the build of the device, thus lowering its weight to 162 grams and becoming the lightest 5.5 inches smartphone in the world. They also wanted to add metal borders to the phone, but that would have added unwanted weight and cause signal issues, so it’s a small sacrifice considering the result.

The One measures 152.9 x 75.9 x 8.9mm with edges of 4.6mm, with a 5.5” full HD JDI-made display, resulting in a pixel density of 401ppi. It features the Qualcomm Snapdragon 801 (which also powers the recently-released HTC One (M8) and Samsung Galaxy S5) platform with a quad-core 2.5GHz Krait 400 CPU, 3GB of LPDDR3 RAM. It runs CyanogenMod 11S based on Android 4.4 KitKat, that’s been custom optimized for its hardware. The One is not the only CyanogenMod phone, as the Oppo N1, released in October 2013 is still available.

“We’ve brought out the full potential of the hardware and complemented it with innovative new features to give users a fresh new experience and the tools to tailor the One to their personal style,” said Cyanogen CEO Steve Kondik

The OnePlus One comes with dual stereo speakers at the bottom and a 13 MP Sony IMX214 Sensor with 6 lenses, to correct for distortion and color aberration, and f/2.0 aperture camera in the back, capable of a shutter speed of 0.3 seconds and it records 4K video with stereo sound or 720p slow-motion video at 120fps. The original version of the OnePlus One features an internal memory of 16 GB and 3GB RAM, but there is another version with a massive 64 GB on-board. Not that it’s a bad thing, is rather great, but a microSD card slot would have been far more appreciated.

Another disputed subject is the One’s battery. Again, nothing wrong with the Li-Po 3100 mAh battery, but the fact that it’s non-removable seems to be an issue. What is removable and grants many wishes for those who want to add a little personality to their smartphones, is the One’s back cover. The company is also launching special StyleSwap covers, available in four different patterns: bamboo, wood, denim and kevlar.

The OnePlus One costs only $299, cheaper than the other smartphones released this year, but as good as this might sound, unfortunately the One is a device obtainable only  by invitation. What does this mean? Well, first of all, OnePlus is a company still in its infancy, so releasing a large number of devices when there’s the risk of selling only a few of them, is not an option. Thus, the company will probably select a small number of willing people to sell their device to and hear out their opinions about it before making the product available to everyone. The device will launch in launch in Q2 with Austria, Belgium, Canada, Denmark, Finland, France, Germany, Hong Kong, Italy, Netherlands, Portugal, Spain, Sweden, Taiwan, UK, and the USA, with the latter getting it first.

I’m Load The Game’s co-founder and community manager, and whenever I’m not answering questions on social media platforms, I spend my time digging up the latest news and rumors and writing them up. That’s not to say I’m all work and no fun, not at all. If my spare time allows it, I like to engage in some good old fashioned online carnage. If it’s an MMO with swords and lots of PvP, I’m most likely in it. Oh, and if you’re looking to pick a fight in Tekken or Mortal Kombat, I’ll be more than happy to assist! Connect with me by email markjudge (@) loadthegame.com only
@@MarkJudgeLTG
Previous Bitcoin, the upgrade to money
Next Dayz Devblog and Patch notes for stable revealed