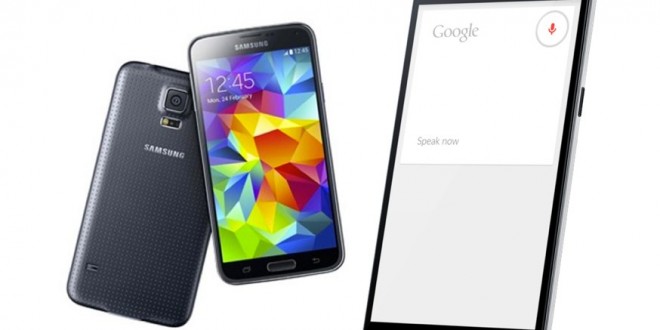 It seems like the giants of the flagship smartphone realm have some competition. Dubbed “the flagship killer”, the OnePlus One offers a premium smartphone experience at a low price so that everyone can enjoy it. And yet, the Samsung Galaxy S5 represents a giant company that has accustomed us with technological progress and innovation year after year, so deciding which smartphone is the best will definitely be a challenge.

The OnePlus One has a minimalistic look, its display is surrounded by a chrome frame which gives it a premium feel, and a smooth, hard plastic back that comes in four different patterns: bamboo, wood, denim and kevlar. The all-black front features capacitive buttons, but it’s entirely your choice if you want to use these or the on-screen keys. Measuring 152.9 x 75.9 x 8.9mm with 4.6mm edges, the One is narrower than other phablets, turning out to be quite difficult for one-hand use.

The Samsung Galaxy S5 has a premium feel, with soft plastic back with textured design and the Samsung signature button on the front with a home button with two capacitive keys on each side and a new app key, instead of the menu key. The S5 is smaller than the OnePlus One, measuring 142 x 72.5 x 8.1 mm. However, it’s PayPal (fingerprint sensor) and IP67 certified (dust and water resistant), features the One doesn’t have.

The OnePlus One features a 5.5 inches, 1080×1920 pixels (401 ppi pixel density), IPS LCD capacitive touchscreen and 16M colors, which also comes with TOL tech (eliminates the distance between the touch sensors and the display panel) and Corning Gorilla Glass 3.

As the OnePlus One, the S5 also features a 1080 display, but it’s smaller than the One, measuring 5.1”, thus resulting a 432ppi pixel density. The Super AMOLED display features Corning Gorilla Glass 3 and provides great colors, contrasts and brightness, providing rich and colorful experiences.

The OnePlus One comes with the Snapdragon 801 processor, quad-core 2.5 GHz krait 400 CPU and Adreno 330 GPU. The original version of the OnePlus One features an internal memory of 16 GB and 3GB RAM. There is also a version with a massive 64 GB onboard. The Li-Po 3100 mAh battery is non-removable, which may be an inconvenient, considering the impossibility of carrying a spare battery in case the current one dies. Regarding the software, the OnePlus One runs CyanogenMod 11S, a version of Android OS, v4.4.2 KitKat, that’s been optimized for its hardware.

Samsung Galaxy S5 also comes with the quad-core 2.5 GHz krait 400 CPU, Snapdragon 801 processor and Adreno 330 GPU. Regarding the memory, the S5 has 2GB RAM, less than the OnePlus One, 16 GB or 32 GB storage, also less than its competitor, whose 64 GB version is truly remarkable. But this shouldn’t be problem, since the Galaxy S5 features expandable storage, an option that isn’t available with the OnePlus One, and its performance is smooth and fast, as is the One’s. The S5’s battery is also smaller, 2.800 mAh, but unlike the OnePlus One’s, it’s removable and comes with a power saving mode, which is definitely a major advantage for the Galaxy S5 in this strife. It runs the Android OS, v4.4.2 (KitKat) and features the familiar TouchWiz UI, with some new upgrades like the MyMagazine, a second screen working as news aggregator.

The One has a great Sony Exmor RS sensor combined with a 6 parts lens with a f/2.0 aperture dual LED flash camera, with features like Geo-tagging, touch focus, autofocus, face detection, panorama and HDR. The primary camera has 13 MP, 4128 x 3096 pixels, all in all, a perfect selfie taker. Regarding video recordings, these are also of the best quality, due to the 2160p@30fps, 1080p@60fps, 720p@120fps, video stabilization and HDR and the 5 MP, 1080p@30fps secondary camera.

Both devices come with great features, are well built and their appearances are minimalistic and provide a premium feel, but the OnePlus One has no competitor when it comes to price. Costing only $299, the One could become very popular amongst smartphone lovers, bringing a great Android experience at a low price. But is it better than the Galaxy S5? That remains to be seen, given that the S5 is one of the most appreciated smartphones. Which one would you choose?

I’m Load The Game’s co-founder and community manager, and whenever I’m not answering questions on social media platforms, I spend my time digging up the latest news and rumors and writing them up. That’s not to say I’m all work and no fun, not at all. If my spare time allows it, I like to engage in some good old fashioned online carnage. If it’s an MMO with swords and lots of PvP, I’m most likely in it. Oh, and if you’re looking to pick a fight in Tekken or Mortal Kombat, I’ll be more than happy to assist! Connect with me by email markjudge (@) loadthegame.com only
@@MarkJudgeLTG
Previous Whistleblower DLC for Outlast arriving on May 6 for PC and PS4
Next Call of Duty Patriots rumored be the name of 2014’s CoD game