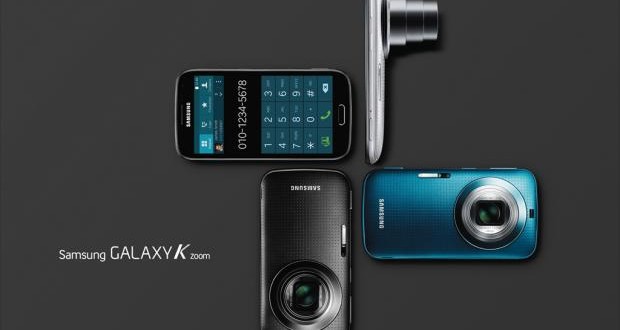 Samsung revealed its newest camera-phone hybrid on Tuesday in Singapore. This is the second camera-specific smartphone made by the company, the first being the Galaxy S4 Zoom. It has a more elegant design than its predecessor offering improved hardware and specs.

If you like to take selfies the Samsung Galaxy K’s “Selfie Alarm” feature will make it easy for you. It will allert you when it detects your face in a pre-selected region of the photo and automatically takes a picture. The “Pro Suggest” will suggest the best camera configuration for the picture you want to take.

As a smatphone, the Galaxy K Zoom comes equipped with a Hexa-core processor meaning it has a 1.3 Ghz quad-core and 1.7 Ghz dual-core processor. It also comes with 2GB of RAM, 8GB internal storage and microSD support of up to 64GB, making sure you have enough storage for all your pictures. Offers Wi-Fi, Bluetooth 4.0, NFC, GPS, A-GPS, GLONASS and 4G LTE connectivity and packs a 2430mAh battery. It has an ultra power-saving mode identical to the S5, which shuts down all non-essencial functions and turns the screen B&W.

The Samsung Galaxy K Zoom comes with Android 4.4.2 KitKat and Samsung’s own TouchWiz UX. It’s equipped with a 4.8-inch Super AMOLED display at 720×1080 px resolution and 306ppi. It can’t be considered a slim device, nor a light one. It’s similar in looks to the S5 but it’s twice as thick and weighs 200g. This however is understandable considering the big camera and also the retracting mechanism that it needs to house.

The Samsung Galaxy K Zoom will be available in the begging of May in some Asian and European countries but no release dates are known for the US. We have no information about it’s price yet.

Tech enthusiast and RPG gamer, I've been surrounded by technology and PC hardware my entire life. I'm fascinated by anything mobile, and when I'm not tinkering with some newly released gadget, I love to immerse myself in the epic tales of Role Playing Games.
Previous LG G3 will launch on 27th of May – What to expect
Next Google ends the Nexus line in behalf of the upcoming Android Silver