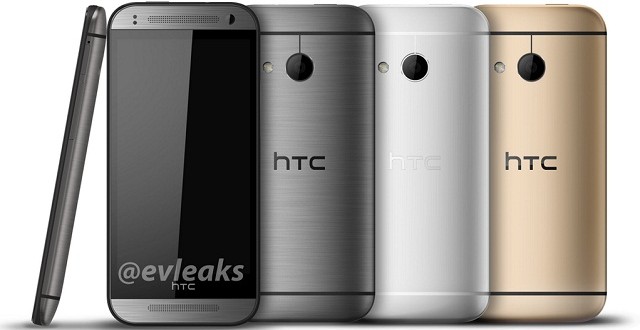 HTC One Mini 2 is on the way according to leaks

An image posted on Twitter by notorious tipster @eveleaks reveals that a smaller version of HTC One M8, dubbed HTC One Mini 2 is in the works. We’re not sure how legitimate this information is, but the user has a pretty good track record when it comes to leaking information about upcoming smartphones.

The device shown in the image above looks almost identical in design to its bigger brother, the HTC One M8. There are a couple of differences however as the Mini doesn’t appear to feature Duo Camera or dual LED flash. Instead, it looks like HTC have opted for just one rear camera and one LED flash for the upcoming smartphone. Rumors hint at a 13MP shooter on the smaller device, by comparison the larger handset features two lower resolution 4MP cameras.

The user also points at another tweet that gives us a few details regarding the specifications for the HTC One Mini 2. Overall, the specs look to be less impressive than on the HTC One M8, but it’s not surprising considering that we’re looking at a thumbed down version. The device will feature a 4.5-inch display running at 720p resolution, 1.4 GHz processor, 1GB of RAM and 16GB internal memory. There is also a micrSD card slot that allows for added storage, but we don’t know how much at the moment.

There is no word yet on a release date as these are just rumors and an official announcement has not been made by HTC yet. If we are to believe the image, the HTC One Mini 2 will come in three colors, gunmetal, silver, and gold and will reportedly run on the Android 4.4 KitKat OS.

I’m Load The Game’s co-founder and community manager, and whenever I’m not answering questions on social media platforms, I spend my time digging up the latest news and rumors and writing them up. That’s not to say I’m all work and no fun, not at all. If my spare time allows it, I like to engage in some good old fashioned online carnage. If it’s an MMO with swords and lots of PvP, I’m most likely in it. Oh, and if you’re looking to pick a fight in Tekken or Mortal Kombat, I’ll be more than happy to assist! Connect with me by email markjudge (@) loadthegame.com only
@@MarkJudgeLTG
Previous Google Glass struggles with decline
Next GTA 5 Cheats that still work! – For Ps3 and Xbox 360