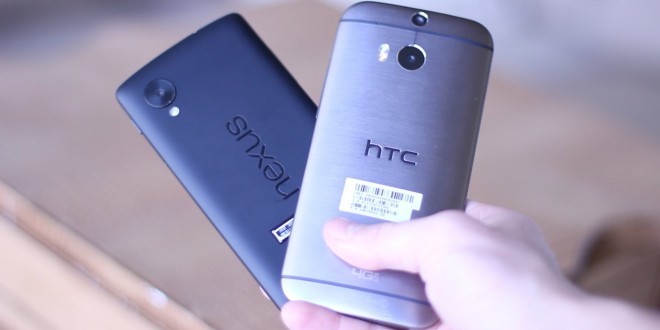 The Nexus 5 has been around for more than half a year now, that’s quite a bit by smartphone standards. Even so, the device co-developed by Google and LG is still one of the most popular handsets currently available on the market. On the other hand, the second generation HTC One, also known as HTC One M8 is barely over a month old and has already made its way to the front of the pack. Both devices are quality products, but which one is better? That’s what we’re trying to find out.

It’s no secret by now that Nexus 5’s success is attributed in part to it’s low price point. However, that doesn’t mean the device doesn’t have anything else to show for itself, quite the contrary. The N5 features a lightweight plastic design with ceramic volume and power buttons, all at a mere 130 grams. The device also sports a 4.95-inch True HD display running at 1920 x 1080 resolution and features a grand total of 445 pixel density.

A quick look at the specs reveals that even though the device has been around for over six months now, it can still hold its own against most competitors. The Nexus 5 comes equipped a with Qualcomm Snapdragon quad-core processor running at 2.3 GHz, 2GB of RAM, 2,300 mAh battery, and 16GB/32GB storage memory options.

That’s not everything of course as the Nexus 5 also features a great 8 Mp rear snapper with Optical Image Stabilization, as well as a 1.2 megapixel front camera. The smartphone comes right off the bat with the Android 4.4.2, but rumor has it that by June the device will run on the new Android 4.4.3 KitKat.

Many people simply like to call it “The One” and it’s easy to understand why. This device is very solid all around but it can get a bit pricey so keep that in mind. HTC One M8 features a beautiful aluminum build that makes plastic smartphones look bad. There is a downside to this however as at 160 grams its heavier that most in its class.

The display doesn’t necessarily try to reinvent the wheel, but at 441 pixel density and 1920 x 1080 resolution, the 5-inch Super LCD 3 panel is pretty much one of the best around. The HTC One M8 also features a very unique 4 MP Duo Camera setup on the back, with an “Ultrapixel” sensor that can capture more light than other devices. If that wasn’t enough, you also have a secondary front facing 5 megapixel camera.

Design and camera aside, The One also features some very good specs as we’re about to see. We’re looking at a powerful Qualcomm Snapdragon 801 @ 2.3 processor, 2 GB RAM, 2.600 mAh battery and 16GB/32GB storage options. Also included, a microSD card slot which allows you to add up to 128 GB of additional memory. Just like the Nexus 5, the HTC One M8 also runs on Android 4.2.2 KitKat, but no rumors about a possible update this time around.

Who takes the cake?

Overall, the HTC One M8 comes with better design, specs, and features. One could argue that it’s clearly superior in almost every way right? However, there is a reason why the Nexus 5 is so popular and that’s the very low price tag of only $350, no strings attached. On the other hand, the HTC One M8’s standard no contract price is currently somewhere around $650, quite the difference. The Nexus 5 is a great bargain if you’re looking for a good smartphone, but if money is not an issue you should definitely go with the HTC One M8. It’s hard to declare a winner under these circumstances but we’re giving the trophy to The One this time, however it was a very close call.

I’m Load The Game’s co-founder and community manager, and whenever I’m not answering questions on social media platforms, I spend my time digging up the latest news and rumors and writing them up. That’s not to say I’m all work and no fun, not at all. If my spare time allows it, I like to engage in some good old fashioned online carnage. If it’s an MMO with swords and lots of PvP, I’m most likely in it. Oh, and if you’re looking to pick a fight in Tekken or Mortal Kombat, I’ll be more than happy to assist! Connect with me by email markjudge (@) loadthegame.com only
@@MarkJudgeLTG
Previous Facebook: Poke and Camera apps were removed from the App Store
Next Samsung Galaxy K Zoom Revealed