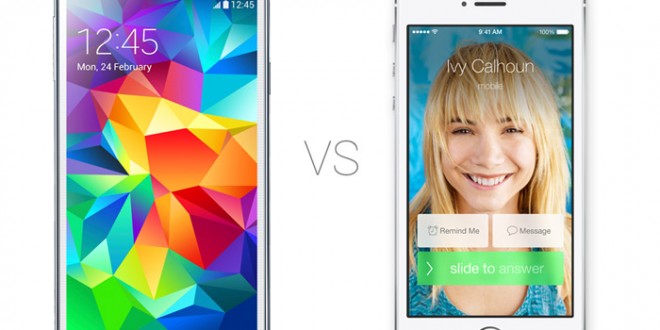 Samsung’s new flagship smartphone has proven itself worthy of all praise. The Galaxy S5 is by far Samsung’s best smartphone, evidence that the giant company is a fierce rival when it comes to quality devices. Yet, how will it respond to the biggest threat in the smartphone domain, Apple’s own iPhone 5S? The iPhone 5S is also a venerable smartphone, also considered the best amongst its sibling. So let the “S” battle begin!

As expected from Apple, the iPhone 5S has a top design, made from anodized aluminum with diamond cut chamfered edges, available in three colors: gold, silver and grey. As any other device made from aluminum, the 5S also feels like a first class, premium product. The iPhone 5S is smaller than most smartphones, measuring 123.8 x 58.6 x 7.6mm and weighing 112g. with sizes like this it’s only natural the iPhone 5S is very easy to use and very comfortable to keep in a pocket.

Meanwhile, the Galaxy S5 has a dimpled soft-touch plastic back, naturally is doesn’t have the same premium look as the iPhone, but it’s easier to grip. The plain black finish on the front gives it a stylish appearance, but the handset is entirely made from plastic so even if it comes in different colors (black, white, gold and blue), the S5 could never compete with the iPhone 5S’ appearance. The Galaxy S5 is larger than its competitor, measuring 142x73x8.1mm, and weighting 145g, it’s also a bit heavier, but it’s still as comfortable to use as the iPhone.

The iPhone 5S has a 4-inch Corning Gorilla Glass LCD display, rather small compared to other devices. The bezels are very slim, only 4mm thick, meaning the screen represents more than 60% of the smartphone’s front surface. This is not entirely a bad thing, you can easily reach from the bottom corner to the top corner with your thumb. The iPhone 5s has a screen resolution of 1.136×640 and a pixel density of 377ppi, meaning the iPhone 5S is unable to play Full HD video, or even take 720p footage, but with this pixel density there not a chance to see individual pixels from an average distance.

The Galaxy S5 on the other hand has a larger 5.1-inch Corning Gorilla Glass AMOLED display but thinner bezels, only 3mm thick. Both devices have the aspect ratio 16.9, but while the iPhone 5S looks tall and thin, the S5 is a challenge for people with short fingers, they might have to struggle to reach the top of the device with the thumb without moving the entire hand. The screen also takes up a greater percentage of the front than the iPhone, mostly because there’s only a little space for bezels, microphones, speakers and buttons. The resolution is bigger than the iPhone’s, 1.920×1.080 Full HD, with a pixel density of 432ppi, meaning it can play Full HD videos.

The iPhone 5S has an ARM v8-based 1.3GHz dual-core processor, a PowerVR G6430 GPU and 1GB of RAM. It comes with internal storage of 16GB, 32GB or 64GB and a 1,560mAh battery which means that the iPhone 5S has excellent battery life. Regarding the software, the iPhone 5S runs Apple’s iOS operating system.

The Galaxy S5 has a Snapdragon 801 processor running at 2.5GHz, a faster Adreno 330 GPU and 2GB of RAM. You can choose between the 16GB or 32GB versions, but even if it doesn’t come with 64GB of internal storage the Galaxy S5 has a microSD card slot which supports up to 128GB cards.the S5 has a better battery, a Li-Ion 2800 mAh, so perhaps is also has a better battery life as well. Regarding the software, the S5 runs Android OS, v4.4.2 KitKat, a customized version of Google’s Android.

iPhone 5S features a 8MP camera with a dual LED flash and a 3.264 x 2.448 resolution. The 1/3in sensor has 1.5µm pixels, significantly larger than other smartphone cameras. The camera also records Full HD videos at 30fps, plus, it features a slow-motion function.

Meanwhile, the Galaxy S5 has 16 MP and a 5.312 x 2.988 resolution. Samsung used the new ISOSCEL sensor technology for their device, which reduces the crop factor and prevents the light from leaking between pixels. The camera is also able to record Ultra HD (4K) 3.840×2.160 video at 30fps and shoot video in HD, plus, it has a 1/2.6in sensor with 1.241µm pixels, visibly smaller than 5S’.

We must admit both devices are remarkable, well-build and with attractive designs, even if some prefer aluminum over plastic, or the other way around. The iPhone 5S has a premium, classic design, while the Galaxy S5 is rather elegant due to the plain black finish on the front. In what concerns the hardware, both devices very good insides, yet the Galaxy S5 is faster and has 2GB RAM, 1GB more than its rival. The fact that the S5 has a microSD card slot that expands internal storage capacities is definitely a bonus.

A better battery was always an important feature of a device, but in this case things are a bit unclear. The S5 has a better battery, but it’s also bigger than the iPhone 5S, apart from this, it also runs Android OS.4.2 KitKat, the customized version of Google’s Android, which seems to be a real energy junkie. So perhaps the battery isn’t that important, nor is the OS, because in this case it all comes down to your preferences. The Samsung Galaxy S5 does take better pictures and records Ultra HD videos, while the iPhone 5S lacks some megapixels and has a smaller resolution. Galaxy S5 also has a better display, even if it’s bigger, it provides clear colors and great details. But so does the iPhone 5S, apart from this, the iPhone 5S is very easy to use, being “tall and thin” it’s perfect for almost everyone.

Giving a verdict in this confrontation is definitely not easy, both devices have their pros and cons, so the choice belongs entirely to you. But whichever you choose you won’t be disappointed, because both devices come with great features and wear the branding of the giant companies.

I’m Load The Game’s co-founder and community manager, and whenever I’m not answering questions on social media platforms, I spend my time digging up the latest news and rumors and writing them up. That’s not to say I’m all work and no fun, not at all. If my spare time allows it, I like to engage in some good old fashioned online carnage. If it’s an MMO with swords and lots of PvP, I’m most likely in it. Oh, and if you’re looking to pick a fight in Tekken or Mortal Kombat, I’ll be more than happy to assist! Connect with me by email markjudge (@) loadthegame.com only
@@MarkJudgeLTG
Previous Lenovo Thinkpad 8 VS Apple iPad Mini Retina
Next Acer Aspire Switch 10 unveiled