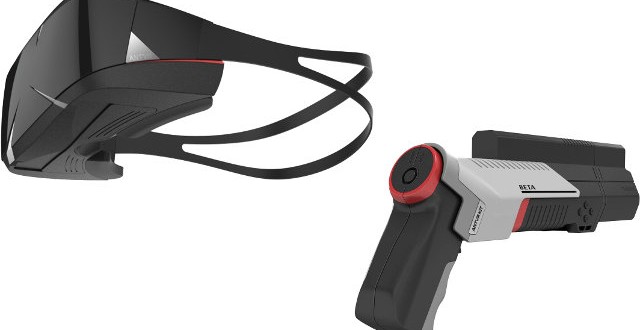 ANTVR is a new cross-platform VR headset on Kickstarter

A new Chinese start-up named ANTVR Technology just launched a new Kickstarter project for their first VR headset. The device is called ANTVR and it needs $200,000  in funding in order to reach the market. The cool thing about ANTVR is the fact that it not only ships with all the cables you need, but also includes a transformable controller, designed to work with a plethora of games.

ANTVR is marketed as a cross-platform, open source device. The company advertises it as compatible with PC, but also with devices like PlayStation and Xbox consoles, Blu-Ray players and Android devices. This seems to be the one size fits all VR Headset and I’m really curious about how this whole thing turns out if it gets funded. The Kickstarter fundraising opened yesterday and it already brought in $90,000 of the 200,000 needed. So they’ve got half of the sum already and there are 38 days to go. It’s quite clear that this project will become a reality.

The minimum donation that grants you an ANTVR dev kit is priced at $270, and it seems that the target retail price will be around $300. It seems crazy, considering the device has specifications close to Oculus Rift’s DK2 model, with 1080p screen and 3D tracking. It’s also curious that the ANTVR is marketed as a wireless headset with lithium batteries powering the screen, sensors and the controller. It also comes with a vest that transforms into a carrying bag.

Right now this all seems a bit too good to be true, but stranger things have happened. Chinese companies can be the most surprising, being able to develop cutting edge technology at a fraction of the cost that other “brand” companies can.

We hope to have more information about ANTVR in the coming weeks and would really like to get our hands on the device as soon as possible. With Oculus and Morpheus already going toe to toe in the VR space, it’s nice to see other competitors enter the fight.

You can find out more about ANTVR via the Kickstarter page, and the video posted above.

Old-school gamer with a cheeky tongue that gets me in trouble. When I'm not playing games, I'm writing about them, preferably in the vicinity of a fridge! Oh, and if you're a Justin Bieber fan, I'm afraid we can't be friends!
Previous The Aerofex hover-bike could be yours by 2017
Next The Division slips into 2015