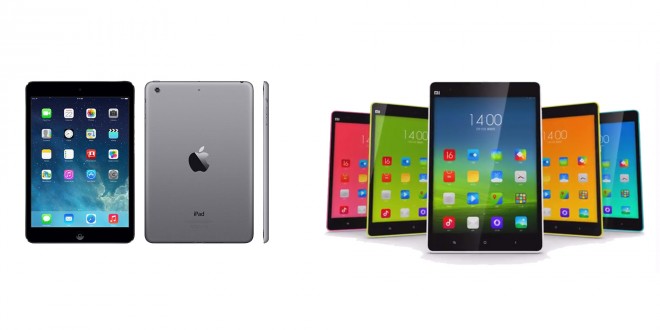 Yesterday, Xiaomi announced it’s first tablet, and it seems to be aiming for the iPad Mini Retina fans, with similar form factor, screen and with a beefed up hardware. We’ve decided to do a little theoretical comparison between the two, to see which one could win in a face-off, at least on paper. While the iPad Mini Retina has been available in stores since October, the Mi Pad will be launching sometime this year. It’s pretty clear that Apple will refresh it’s line of tablets this fall, but we’ll try to answer an interesting question with this article: is it worth the wait for the next generation iPad, is it worth to wait for the Mi Pad, or should you just buy the Mini Retina right now? Let’s find out.

The iPad Mini Retina is basically a smaller iPad Air. If you take a look at the specs below, you will find differences between it and the bigger Apple tablet only in the size and weight departments, because all the other innards are the same. Apple debuted last fall it’s A7 chip, which includes a dual-core 64-bit at 1.3 GHz and a PowerVR G6430 quad-core GPU, and included it inside iPad Air, iPad Mini Retina and the iPhone 5S. Although it might not look like much on paper, this baby can sing, and it’s not slowed down by any iOS app available right now.

When you talk about iOS devices, specs are really not that important. Unless they’re a few years old, they perform beautifully. That 1 GB of RAM memory is enough to keep all the apps you need running side by side. That’s because Apple uses a very smart multitasking system that can keep some apps running in the background while suspending those you haven’t used in a while. This also saves battery life, and with the 23,8 Wh battery included in the iPad Mini Retina, you can be sure you get 10+ hours of use no matter what you’re using your tablet for.

And let’s not forget about the beautiful screen. It’s a 7.9 incher offering the same resolution as it’s 9.8 inch brother: 2048×1536 (324 ppi). This means that you get everything displayed in what Apple calls “retina” quality. Unfortunately, all this comes at great cost. This is an Apple device, and the price shows it. The starting price for the iPad Mini Retina is $399, for the WiFi-only 16 GB model. The price goes up $100 for each size increment (32, 64 or 128 GB), and for those who wish to buy a 4G model, it’s even more expensive. The 16 GB Cellular model costs $529 and each bigger version costs $100 more than the other. That means that a “full option” iPad Mini with Retina display with 128GB storage costs a whooping $829. That’s a bit steep, if you ask me, even after taking into consideration the great OS and apps available, the amazing build quality, the sleek design and long battery life.

On the other hand, Xiaomi, the Chinese electronics manufacturer has just announced the Mi Pad, a similar sized tablet with beefier specs compared to the iPad Mini. This tablet has some great hardware under the hood, and by now it may come as no surprise that it’s powered by Android latest version: 4.4.2 KitKat. This is the first announced tablet which sports Nvidia’s new Tegra K1 chip. The SoC  (system on a chip) includes a 2.2 GHz “4+1” core processor and a 192-core Kepler based PC-grade GPU, as the company describes it. This is a beast of a SoC, but it has not yet proven itself in the wild. What’s clear though, judging from Nvidia’s past offerings in the mobile market, is that this processor will eat up any and all apps you throw at it.

Xiaomi’s tablet comes equipped with 2GB of RAM, and comes in two versions: with 16 or 64GB of on-board storage. The downside is that there is no cellular version planned, and that may be Nvidia’s fault. Historically, the chip manufacturer takes a long time to develop an SoC with radio on-board, and that also seems to be the case with the K1. It’s no biggie, though, because the lack cellular antenna gives the Mi Pad better battery life. What’s nice about the Xiaomi’s tablet is the fact that it comes in a myriad of colors, ranging from the classic black and white, to red, blue, green and yellow, offering you choice based on your preferences.

The downside to the colors is the fact that the back of the device is made of glossy plastic, similar to that used on the iPhone 5C. The back of the device may be solid, but plastic can be easily scratched by dust particles, and it doesn’t feel as sturdy as an aluminum case. It’s great though that the two devices share the same resolution and have similar sizes, so if you’re in the market for an iPad Mini, you may consider this tablet as well, if the form factor is the killer feature you’re looking for. But here comes the big elephant in the room I have not addressed yet: the price. The Xiaomi Mi Pad will cost only $240 for the 16GB version and $270 for the 64GB version. These are converted Chinese prices, but we can assume they’ll be adjusted to 249 and 299, and the’re still a lot cheaper than the iPad Mini Retina. Choosing the Mi Pad over the iPad gets you a very powerful processor, same screen resolution, same size, a plastic case, fewer storage options (although enough to satisfy anyone) and access to a micro-SD slot; all of these at lower cost.

So now it’s time to pick a winner, but also answer the question I asked in the introduction. It is pretty clear that the Mi Pad wins this fight fair and square. If you’re not already deep into the iOS ecosystem, save yourself some money and just buy the Mi Pad. It’s more powerful, it gives you a bit more flexibility with Android and the micro-SD card slot, it has better cameras and will perform mostly the same functions. It may not have an aluminum back or cellular options, but at that price, you can live without those features. To answer the question though, I don’t think that buying an iPad Mini Retina right now would be a very smart move. Apple will refresh all of its mobile devices this fall, and Xiaomi will launch the Mi Pad in a beta program this June, with a bigger launch slated for later this year. The best thing right now is to wait and pick your favorite when it comes out, be it iPad Mini Retina or Mi Pad.

We chose the Mi Pad as our winner. Which do you prefer and why? Let us know in the comments below.

Old-school gamer with a cheeky tongue that gets me in trouble. When I'm not playing games, I'm writing about them, preferably in the vicinity of a fridge! Oh, and if you're a Justin Bieber fan, I'm afraid we can't be friends!
Previous Android 4.4.3 KitKat might be arriving next week for Nexus 5 and Nexus 7
Next Xiaomi announces 4k resolution Android TV for just $640