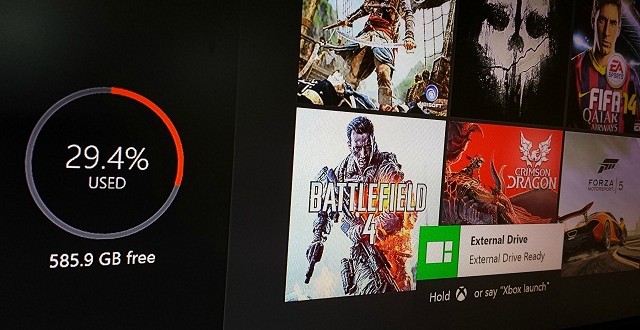 Microsoft recently teased a feature that Xbox One users have been asking for a long time: external hard drive support. ‘XboxOneDev’ posted a short but revealing comment on Reddit, and a link to an image that pretty much tells the whole story. The user was confirmed to be an actual Xbox developer so it’s unlikely that this is just another rumor.

The post titled “Adding more hype on the list of things to come” includes a picture that shows external hard drive support for Xbox One. XboxOneDev also teases us with a “Soon…” message, just in case Xbox users weren’t hyped enough by the image itself. Needles to say, the Reddit post became very popular very fast and has gathered 286 comments at the time of this writing.

Right now every Xbox One comes equipped with a 500 GB internal hard drive. The one depicted in the image shows 585.9 GB free, which means that an external hard drive was already added when the picture was taken. A pop-up with the message “External Drive Ready” is also displayed on the screen. User kftgr2 has done the math and arrived at the conclusion that the total usable storage will be around 830 GB. The remaining memory is reserved for saved games, console software, and other system functions.

External hard drive support would be just what the Xbox One needs in order to sway more customers to Microsoft’s side. The PS4 is currently still leading in the console wars, but for how much longer? Recently Microsoft announced that a Kincet-free Xbox One will be made available starting with June 9. This version will be cheaper and will possibly come with a performance boost as well.

All these Microsoft announcements are sure to make Sony a bit nervous, but I’m sure the company will come up with something to even the odds. We have no idea when the external hard drive support will make its way to the Xbox One, but the dev did mention “Soon….”

I’m Load The Game’s co-founder and community manager, and whenever I’m not answering questions on social media platforms, I spend my time digging up the latest news and rumors and writing them up. That’s not to say I’m all work and no fun, not at all. If my spare time allows it, I like to engage in some good old fashioned online carnage. If it’s an MMO with swords and lots of PvP, I’m most likely in it. Oh, and if you’re looking to pick a fight in Tekken or Mortal Kombat, I’ll be more than happy to assist! Connect with me by email markjudge (@) loadthegame.com only
@@MarkJudgeLTG
Previous iPhone 6 to have a 1704×960 display resolution
Next Samsung Galaxy S5 Mini vs Blackberry Z30 – Medium-budget phones