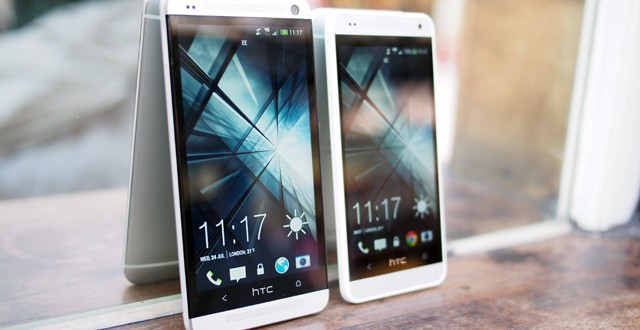 According to a recent Twitter leak, the HTC One Remix will soon be making its way to Verizon. The device looks to be very similar to the recently announced HTC One Mini 2, but also burrows some design elements from the HTC One M8.

The HTC One Remix will apparently come with a bright blue plastic trim and will feature on-screen navigation buttons, if we are to believe the image. On the spec side, this version is rumored to be pretty much identical to the HTC One Mini 2 in all respects. Listed below are the confirmed specifications for the HTC One Mini 2.

HTC One Remix will most likely feature the very same set of specs if rumors are to be believed. As far as we can tell this device is just a Verizon variant of the HTC Mini 2 with some slight modifications in terms of design. A release date has not been mentioned but we know that the international version is said to launch sometime is June. We can assume this one will make an appearance around the same time as well, but we’ll have to wait for confirmation before we can say for sure.

Although this is technically just a rumor, @evleaks is notorious for leaking smartphone related info long before any official announcements have been made. Another recent leak he made claims that the highly anticipated Google Nexus 6 will not be making an appearance after all. Instead, the internet giant seems to be more focused on its Android Silver program and might give Silver Certification to an upcoming LG handset.

I’m Load The Game’s co-founder and community manager, and whenever I’m not answering questions on social media platforms, I spend my time digging up the latest news and rumors and writing them up. That’s not to say I’m all work and no fun, not at all. If my spare time allows it, I like to engage in some good old fashioned online carnage. If it’s an MMO with swords and lots of PvP, I’m most likely in it. Oh, and if you’re looking to pick a fight in Tekken or Mortal Kombat, I’ll be more than happy to assist! Connect with me by email markjudge (@) loadthegame.com only
@@MarkJudgeLTG
Previous First Samsung Galaxy S5 Prime images revealed
Next Windows 9 preview might be available early next year