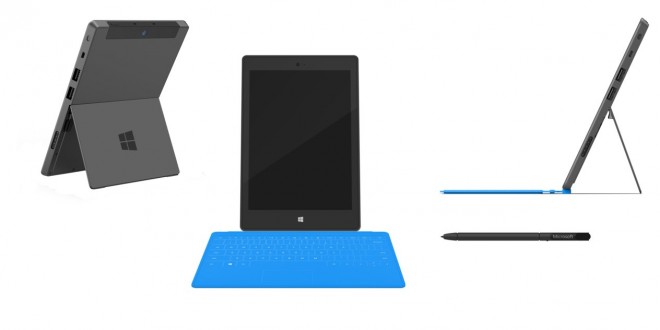 Surface Mini to be announced today in NY City!

On Tuesday, the 20th of May, Microsoft will be presenting to the world the long-awaited Surface Mini, at an event in New York City. After Apple’s success with iPad Mini, Microsoft decided to give it a try releasing the Surface Mini, hitting the small-screen tab market, using Windows RT as an operating system.  For those who are not yet familiar with this version of Windows, RT is an edition of Windows 8 designed for mobile devices, with a 32 bit ARM architecture. It presents advantages like longer battery life, the fact that it allows using system-on-chip designs and it makes it easier for engineers to build thinner devices and the fact that it supports a large number of USB peripherals and accessories.  It also includes a Microsoft Office 2013 version. It was announced as a prototype at the beginning of 2011 at the Consumer Electronics Show, but people were skeptical back then. Microsoft does show a lot of confidence at this point by introducing it to this mini tab, because of the public’s skepticism.

The Surface Mini tablet will most likely have an 8 inch screen, wearing an Intel processor and it will be preloaded with Windows 8.1 RT. The resolution of this mini tab will most probably be a 1400 x 1080 pixel resolution and it will include a digital pen, as it is designed mostly for taking notes. Also, a separate keyboard will accompany the new device and the expected price is somewhere around 350 $, but nothing is clear yet. Even though it does not look much like a competitor for other high-end technology tablets, Microsoft likes it good enough to think of other models, too, after the release of the initial Surface.

Apart from the Surface mini, Microsoft will be releasing more information on Tuesday about the other device they are proud of, the new Surface Pro 3. Assumed to cost around 1500$, consumers have gone crazy because the information is not clear, neither are the specs. So this event it is much expected and we are looking forward to hearing more from the event and keep information up to date. Hopefully, Microsoft’s representatives will be able to surprise the wide public.

I’m Load The Game’s co-founder and community manager, and whenever I’m not answering questions on social media platforms, I spend my time digging up the latest news and rumors and writing them up. That’s not to say I’m all work and no fun, not at all. If my spare time allows it, I like to engage in some good old fashioned online carnage. If it’s an MMO with swords and lots of PvP, I’m most likely in it. Oh, and if you’re looking to pick a fight in Tekken or Mortal Kombat, I’ll be more than happy to assist! Connect with me by email markjudge (@) loadthegame.com only
@@MarkJudgeLTG
Previous Samsung says fingerprint scanner is not enough, so iris detection is next!
Next Google could not resist Instagram’s popularity and joined it!