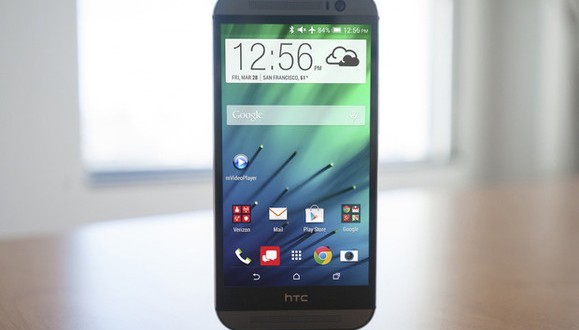 HTC One M8 Review. Quality has a price

Last year’s HTC One turned out to be a big hit amongst fans, but unfortunately, the smartphone didn’t lure as many customers as expected. So in order to maintain the interest of fans and to draw more customers, HTC introduced a smartphone that’s geared up to compete with the flagships of the market. The HTC One M8 comes with an eye-catching design and all the brain power a flagship is supposed to have, but is it enough to defeat smartphones such as the Galaxy S5 or the iPhone 5S? Let’s have a closer look and find out.

The first time you lay eyes on the M8, you see a very luxurious handset. The One M8’s chassis is build entirely from metal, while its predecessor’s was only 70% aluminum and 30% plastic. The M8 feels solid and well-build when touched while its all-metal (Gunmetal Gray, Glacial Silver, Amber Gold) chassis looks more elegant compared to its predecessor’s. The M8 is bigger than the HTC One, featuring a 5 inches screen and measuring 146.4 x 70.6 x 9.4 mm. The smartphone is also a bit heavier, weighing 160g.

The HTC One M8 features a 5-inch Super LCD3 capacitive touchscreen with a resolution of 1920×1080 pixels and a 441ppi pixel density, well protected by the Corning Gorilla Glass 3. Considering the M8 has the same resolution as the HTC One, its pixel density is smaller, but that doesn’t mean you’ll see any pixels.

The smartphone is not only “good-looking”, it also states loud and clear that what’s on the inside matters. The M8 comes with a Qualcomm MSM8974AB Snapdragon 801 chipset, Quad-core 2.3 GHz Krait 400 CPU (US/EMEA and 2.5 GHz Krait 400 in Asia), Adreno330 GPU and a non-removable Li-Ion 2600 mAh battery. The device comes with 2 GB RAM and two internal storage options, 16 GB or 32 GB and microSD card slot for memory expansion up to 128 GB. The M8 runs Android OS 4.4.2 KitKat, but there are rumors suggesting an upgrade of the OS, so the smartphone might feature the Android 4.4.3 KitKat any time soon.

The HTC M8 has a primary 4MP camera with autofocus, dual-LED flash and 2588×1520 pixels resolution. Besides not having a 5MP, or more, camera like other flagship smartphones, the HTC M8’s camera takes pretty good photos and it also has great features like automatic simultaneous video and image recording, geo-tagging, face and smile detection, HDR and panorama, plus, its recordings are satisfying enough. We talk about [email protected], [email protected], HDR, stereo sound recording, which is not bad at all considering the device also features stereo speakers and built-in amplifiers to make video watching (or enjoying some music) more entertaining. Surprisingly enough is the fact that the M8 features a 5MP secondary camera, with [email protected] and HDR, so I guess “in your face” is an understatement in this case.

The HTC One M8 is all in all an outstanding device. Besides being good-looking, its all-metal body tells you from the first time you see it that this is a trustworthy smartphone. There’s almost nothing bad we can say about the HTC One M8, apart perhaps from the fact that its battery is non-removable. The batter is also weaker compared to the batteries other flagship smartphones have. Another, much discussed issue is the price, as the M8 costs $640 off-contract so it’s not a cheap device, but if we have to be realistic the M8 is worth every penny, especially if the rumors are true and the M8 will be upgraded with the Android 4.4.3 KitKat soon.

I’m Load The Game’s co-founder and community manager, and whenever I’m not answering questions on social media platforms, I spend my time digging up the latest news and rumors and writing them up. That’s not to say I’m all work and no fun, not at all. If my spare time allows it, I like to engage in some good old fashioned online carnage. If it’s an MMO with swords and lots of PvP, I’m most likely in it. Oh, and if you’re looking to pick a fight in Tekken or Mortal Kombat, I’ll be more than happy to assist! Connect with me by email markjudge (@) loadthegame.com only
@@MarkJudgeLTG
Previous Facebook’s malware checkpoint shows mercy!
Next Wasteland 2 will be released at the end of August