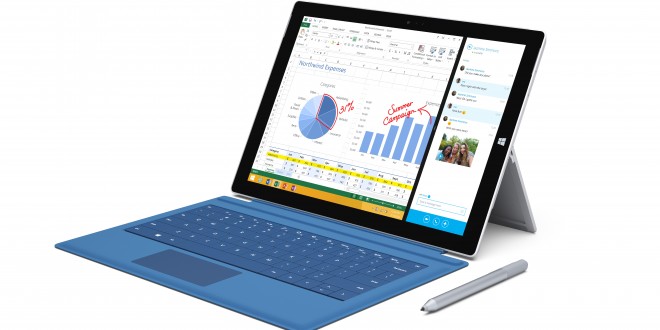 Microsoft introduced another tablet/laptop hybrid at an event this Thursday, called the Surface Pro 3. The Pro 3 is bigger than all existing Surface devices. Its display measures 12 inches, compared with the 10.6-inch displays its predecessors have. Besides the bigger 12-inch display, the Surface Pro 3 is powered by Intel Corp. computer chips, like previous Pro devices.

At yesterday’s event, Microsoft compared the Surface Pro 3 with laptops like Apple’s MacBook Air and didn’t seem to care much about their real competitors from the tablet market. But considering the price for a Surface Pro 3 starts at $799 and rises up to $1.949 (if the device is powered by the most powerful Intel chip) without the keyboard that bends as a cover for the tablet, which costs $129.99, it’s understandable why the company compared the Surface Pro 3 with devices like the MacBook Air that costs $899. So why bother comparing your device with tablets that cost around $200, when it is closer to a laptop and is also wearing a bigger price tag?

“This is the tablet that can replace your laptop,” and Microsoft is “looking at an array of devices. It comes down to what customers need right now,” said Panos Panay, a Microsoft executive.

Satya Nadella, Microsoft’s Chief Executive, added that with a normal tablet you are limited to Web surfacing and reading digital books. On the other hand, you can use the Surface Pro 3 to write documents, take notes or draw with the upgraded digital-pen that comes with the device. Microsoft said it would take orders for the new tablet/laptop starting on Wednesday.

“We want to build experiences that bring together all the capabilities of our company”, Mr. Nadella said.

Even if Mr. Nadella said they’re not trying to compete with their partners, such as Dell Inc. (a company that makes laptops and tablets powered by the Windows operating system), as Microsoft developed a device that’s designed to replace a laptop, this might worry both partners and investors.

There are some who don’t want the company to produce hardware and state that Microsoft loses money on each device it sells. But Mr. Nadella said that devices like the Surface models are the best ones to show off Microsoft’s software, like Office, Skype and OneDrive (digital file-storage service). So it seems like Microsoft will not be making hardware to sell the high-end devices, but to promote their software.

I’m Load The Game’s co-founder and community manager, and whenever I’m not answering questions on social media platforms, I spend my time digging up the latest news and rumors and writing them up. That’s not to say I’m all work and no fun, not at all. If my spare time allows it, I like to engage in some good old fashioned online carnage. If it’s an MMO with swords and lots of PvP, I’m most likely in it. Oh, and if you’re looking to pick a fight in Tekken or Mortal Kombat, I’ll be more than happy to assist! Connect with me by email markjudge (@) loadthegame.com only
@@MarkJudgeLTG
Previous Sony Xperia Z3 – Same Screen, Stronger Frame
Next Samsung Galaxy S5 Gold available to all US carriers next week