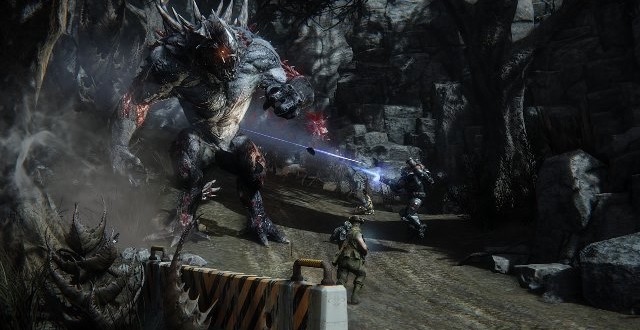 Evolve is coming to PC and next-gen this October

2K Games and Turtle Rock Studios have just announced that the highly anticipated co-op shooter Evolve will be released on October 21st. The game is being developed by the creators of Left 4 Dead and is similar to the series in some aspects.

Evolve features the same four-player survival gameplay we know from L4D, except there’s a twist this time around. Instead of zombies, you and your friends will be fighting a giant monster that goes by the name of Goliath. Furthermore, Goliath will be controlled by a fifth player which means that Evolve will play out more like a 4v1 PVP.

The Hunters going up against the monster come in four different classes, Assault, Medic, Support, and Trapper. Each class has their own unique set of skills and abilities that will come in handy when fighting Goliath. Recently four new characters have been added to the game, one for each class. These additions bring brand new custom weapons and abilities to the table, which are bound to add a lot of variety to Evolve. The monsters themselves will also come in different varieties but for now only the aforementioned Goliath is available.

Hyde, the new Assault character wields a flamethrower which does high amounts of damage but has a very limited range. The new Trapper Maggie has a pet called Daisy which can track Goliath and lead the team directly to the monster. The new Medic goes by the name of Lazarus and can instantly revive fallen teammates. Finally, the new Support character is a robot called Bucket which has certain abilities that make him particularly useful at scouting the area.

Evolve will be released on October 21st for PS4, Xbox One, and the PC. Pre-ordering the game will get you the Monster Expansion Pack, which includes the Savage Goliath skin. Additionally, anyone who pre-orders will also receive the new monster character as soon as it will be made available. Stay tuned for more updates and news.

I’m Load The Game’s co-founder and community manager, and whenever I’m not answering questions on social media platforms, I spend my time digging up the latest news and rumors and writing them up. That’s not to say I’m all work and no fun, not at all. If my spare time allows it, I like to engage in some good old fashioned online carnage. If it’s an MMO with swords and lots of PvP, I’m most likely in it. Oh, and if you’re looking to pick a fight in Tekken or Mortal Kombat, I’ll be more than happy to assist! Connect with me by email markjudge (@) loadthegame.com only
@@MarkJudgeLTG
Previous Diablo 3 Anniversary buff is here to stay
Next SingStar returns on PS4 and PS3

Mods have added a new perspective to games for a long time. Ever since they ...