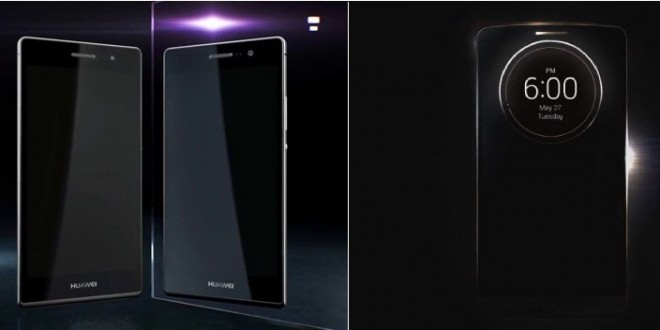 Huawei Ascend P7 vs LG G3 – A glimpse into the future

Today we’re taking a look at the Huawei Ascent P7, a device that presumably “challenges existing industry standards by redefining smartphone design, camera experience, and connectivity”. The company bragged quite a bit about their upcoming smartphone at the unveiling event that took place in Paris earlier this month so we decided to put it to the test. P7’s competitor will be none other than the LG G3, a device that also promises many great things. Let’s take a look at what we know about the two handsets and see if we can decide which of them is better.

The latest product by Huawei was announced earlier this month and is expected to land sometime during July. The company has become pretty popular in recent years and is currently the third biggest smartphone manufacturer in the world. “Huawei’s relentless commitment to developing premium-quality smartphones over the past three years has paid off. We are now ranked number three globally in terms of smartphone shipments, and our brand recognition is growing steadily in key regions such as China and Western Europe,” said Huawei CEO Richard Yu.

Huawei Ascend P7 features a 5-inch display and 1920 x 1080 resolution, all at 441 pixel density. So far so good, we’ve seen better displays before but this one is up to par with many top-tier smartphones currently available. A quick look at its specs reveals that the device sports a Cortex A9 quad-core CPU running at 1.8 GHz, 2GB RAM, and 16GB internal storage. A microSD card slot is also available and allows for up to 64GB additional memory.

Camera-wise, this smartphone can battle with the best of them as it comes equipped with a 13MP rear snapper with autofocus and LED flash. Furthermore, Huawei Ascend P7 also features a pretty impressive 8MP front camera, which is more than most other smartphones have. Megapixel count isn’t everything of course, but it’s good to know nevertheless. Last but not least, Huawei’s handset comes with a pretty big 2.500 mAh battery and runs on Android 4.4.2 KitKat.

LG’s upcoming flagship smartphone has been the subject of all sorts of rumors and speculations lately. The device will be released in a few days and with the confirmed spec list already at hand, we figured this is a perfect time to start comparing. The LG G3 features a “very-unusual-for-a-smartphone” 5.5-inch display with 2560 x 1440 resolution and 534 pixel density. By comparison, Samsung’s Galaxy Note 3 features a 5.7-inch display and is considered a tablet(or “phablet” as some call it).

On the hardware side, we can safely say that the G3 can go toe-to-toe with pretty much any other flagship smartphone currently available. The device sports a Qualcomm Snapdragon 801 quad-core processor @ 2.26 GHz, 3GB of RAM, and comes right off the bat with 32GB internal storage. A microSD card slot is also available and it allows you to add up to 128 GB additional memory.

Moving on, the 13 MP primary camera was recently confirmed to feature optical image stabilization while the secondary one will be a 2.1MP shooter. The LG G3 also come with a pretty massive 3.000 mAh Li-Ion battery that rivals those of some tablets. Finally, just like it’s competitor, the G3 will also run on the Android 4.4.2 KitKat operating system.

Huawei promises a lot and seems like it’s going to deliver, but is it enough? It would be if the Ascend P7 were to compete with many other good smartphones, however from where we’re looking the LG G3 seems a bit better. The price will naturally have to be taken into consideration as well, unfortunately it was not confirmed as of yet. We can assume the Huawei Ascend P7 will be a bit cheaper given that it’s a bit less powerful, but we’ll have to wait for both devices to be released in order to be sure. For now we declare LG G3 the winner but we look forward to see how the Ascend fairs on the market as well.

I’m Load The Game’s co-founder and community manager, and whenever I’m not answering questions on social media platforms, I spend my time digging up the latest news and rumors and writing them up. That’s not to say I’m all work and no fun, not at all. If my spare time allows it, I like to engage in some good old fashioned online carnage. If it’s an MMO with swords and lots of PvP, I’m most likely in it. Oh, and if you’re looking to pick a fight in Tekken or Mortal Kombat, I’ll be more than happy to assist! Connect with me by email markjudge (@) loadthegame.com only
@@MarkJudgeLTG
Previous Xbox One controller drivers for PC coming “soon”
Next Samsung Galaxy Note 4 features leaked by insider