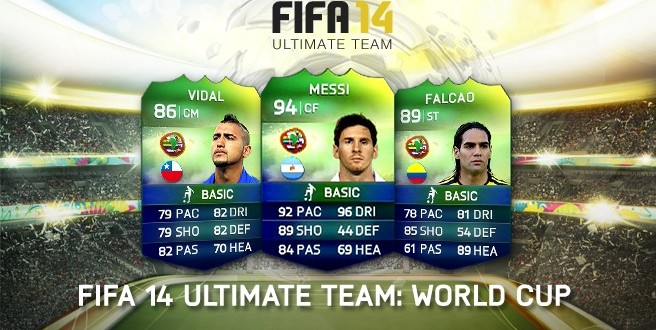 FIFA Ultimate Team: World Cup doesn’t stray too much from the pack, using the same fantasy football inspired mechanics to entice players to build teams and compete in championships online. You can choose from one of 32 supported nations that compete in the 2014 World Cup Championship, you choose a kit and a badge and you’re on your way. You can build your team by buying FUT World Cup card packs from the dedicated store, which you can get via real money or coins, depending on your preference, and players included in these packs are all members of national teams that compete in this summer’s competition.

The card packs and players from regular FIFA Ultimate Team are not transferable to the World Cup component, but the coins are, so if you’ve been earning them by playing that, you can get a little head start. To make the deal even better, EA announced that World Cup packs will include regular FUT Gold Packs. It seems that you’ll be buying lots of packs though, because the whole game is based around player chemistry, meaning that they have to be on the same team or have the same nation in order to cooperate better. To better ballance that, the game now takes into consideration stats like country and govening confederation.

It seems that the new FIFA Ultimate Team: World Cup will evolve with the real-life championship, with cards featuring “Man of the Match” players releasing as the competition progresses. That means that some players may get stat boosts when their real-life counterparts perform well on the field.

FUT World Cup will release this Thursday on the 29th of May for PC, Xbox 360, PlayStation 3, PlayStation 4 and Xbox One.

Old-school gamer with a cheeky tongue that gets me in trouble. When I'm not playing games, I'm writing about them, preferably in the vicinity of a fridge! Oh, and if you're a Justin Bieber fan, I'm afraid we can't be friends!
Previous Star Citizen reaches the $44 million milestone
Next Trials Frontier now available for Android