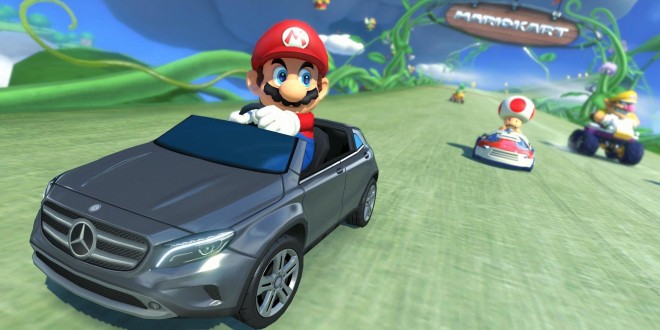 Mario Kart 8 has just released (today) to stellar reviews, and Nintendo already revealed that there are plans for DLC, at least in Japan. Starting soon, Japanese fans of Mario’s karting game will be able to download a new car as DLC. The car itself may surprise everyone, because it’s not some fictive vehicle from the Mushroom Kingdom, but a real Mercedes.

So far the DLC has been confirmed for Japan, with no announcements made for the American or European markets. The car featured in the game will be the new Mercedes GLA, and as a cross promotion, a live-action Mario is featured in the car’s TV ad. It’s a wacky way to promote a car and an unexpected deal for some free DLC.

There is even a Flash takeover featuring Mario on Mercedes’ website, but it does not feature any playable interaction. It would seem that Nintendo is finally embracing what the industry has become, with digital distribution games for 3DS, and DLC for some of it’s premiere licenses. If this is a good or bad thing, the market will decide, and we will probably find out about the effectiveness of the new direction at the end of the next fiscal year.

Until then we just hope to see new Nintendo games for the Wii U, a platform that has not received that much love from gamers, publishers or even Nintendo. With Mario Kart out and the new Smash Bros. on the horizon, that may change. Let’s just hope that it’s not too late to save the console, because a two way battle between Sony and Microsoft may not be healthy for the ecosystem, especially when both companies are chasing the same kind of audience, with little room for Nintendo-like games.

Old-school gamer with a cheeky tongue that gets me in trouble. When I'm not playing games, I'm writing about them, preferably in the vicinity of a fridge! Oh, and if you're a Justin Bieber fan, I'm afraid we can't be friends!
Previous Mass Effect 4: Things we should and shouldn’t expect
Next PlayStation Plus will bring two games to each platform