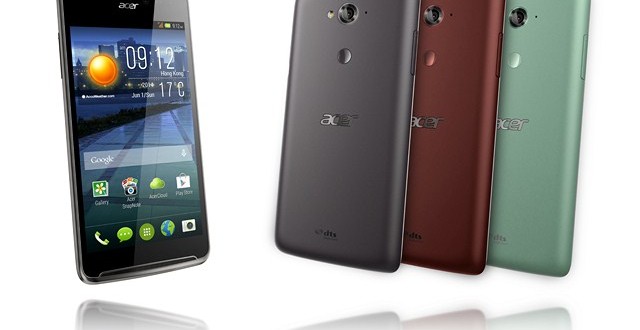 Acer produces both high-end and low-end hardware, but nobody foresaw what  the company was planning to do before Friday’s announcement. It seems Acer is planning an invasion of the smartphone market for later this year, launching no less than five devices. Four devices, and probably the most expected, are the new Liquid phones Acer promised for 2014. Along with the smartphones, the company will also introduce a tablet and a fitness band.

At the top of the list we find the new Liquid X1, a 5.7-inch smartphone with 854X480 pixels resolution powered by a octa-core 1.7GHz processor and also, it comes geared up to support 4G LTE speeds up to 150Mbps. The phablet is featuring a 13 MP rear camera with ultra-fast focus and comes with 2GB RAM, only 16 GB internal storage but it features microSD slot for memory expansion, and a 2700 mAh battery.

The next devices following are the Liquid E600 and E700. Smaller and less powerful than the X1, the two smartphones have 5-inch displays and feature a higher resolution than the X1, 1080X720 pixels to me more exact. The E700 has a quad-core 1.3GHz Mediatek CPU, 1GB RAM, 4GB internal storage and microSD card slot. The smartphone comes with a 8MP lens on the back and a 2MP shooter on the front. What’s more impressive is the 3500mAh battery and the support for three SIM cards. The E600 on the other hand, provides a 4G LTE experience, it features a 1.2GHz quad-core Qualcomm processor and a smaller 2500mAh battery. The smartphone is also loaded with various Acer apps and user interface improvements.

The fourth smartphone Acer announced is the Liquid Z200, a device that’s said to be specially designed for first-time smartphone users. Thereupon, the device has considerably less hardware. It features a 4-inch display, a 2MP rear camera, a dual-core 1.2 mAh Mediatek CPU, 512MB RAM and only 4GB internal storage. The battery is also weaker compared with the other three smartphones, a 1300mAh, which hardly qualifies as a smartphone battery.

Regarding the pricing and the availability of each smartphone, Acer didn’t reveal much. The company also neglected the other Android-based devices said to be launched together with the for previously mentioned. We now very little about the tablet and the fitness band, even less about the fifth smartphone, but we hope to find out more about these three devices and the four smartphones after the Computex conference on 3 June.

I’m Load The Game’s co-founder and community manager, and whenever I’m not answering questions on social media platforms, I spend my time digging up the latest news and rumors and writing them up. That’s not to say I’m all work and no fun, not at all. If my spare time allows it, I like to engage in some good old fashioned online carnage. If it’s an MMO with swords and lots of PvP, I’m most likely in it. Oh, and if you’re looking to pick a fight in Tekken or Mortal Kombat, I’ll be more than happy to assist! Connect with me by email markjudge (@) loadthegame.com only
@@MarkJudgeLTG
Previous HTC is working on One Wear Smartwatch
Next Samsung is working on its VR headset