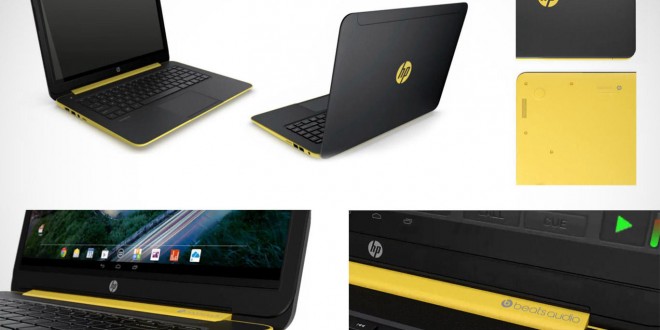 HP has just revealed the SlateBook, a 14-inch Android laptop that appeared in a leaked video at the beginning of 2014. Unexpectedly, this is an Android device with an Nvidia Tegra 4 processor, a 1080p touchscreen and 9 hours battery life. But most of us are skeptical when it comes to an Android laptop of this size. This is not the first Android laptop we’ve seen, but coming from this company, it seems overwhelming. Is HP just taking chances? And is there any real strategy set to sell this device and make a success out of it? Of course, most of the laptop consumers are already Android consumers, too, familiar with the OS and its interface. Have you ever had that strange sensation when you use an Android smartphone all day and than you switch to Windows or Mac? It’s like, sometimes, you would like to keep it all simple and similar. Anyway, the SlateBook will be competing to the new Chromebooks, including HP’s Chromebook 14, which is just a few dollars cheaper. The HP’s SlateBook will be available starting August 6th and the entry level version of it will cost $399.

Very cheap and beautifully designed, at its 3.7 pounds, it surely targets budget consumers. Last year’s SlateBook X2, which is an Android tablet with an attached keyboard, gave users a few headaches. Cramped keys, buggy software and very weak battery life, these were just a few of the issue that users reported since the last year’s release. One of the advantages though, is that all Android apps are available on the laptop and the level of simplicity is very high. These devices could be targeting consumers with very basic computer knowledge. With its 2 GB of RAM and up to 64 GB of internal storage.

The comforting part is that HP also announced the Chromebook PC that runs a Samsung processor. This one looks a little bit classier, but will not necessarily bring a better performance. It has a smaller screen, 11.6-inch, and a resolution of 1366 x 768. It is also lighter than the SlateBook and it weighs 2.69 pounds. It comes with the Chromebook 16 GB of storage and 2GB of  RAM and 6.25 hours battery life. The Chromebook PC will start at $249 for a WI-Fi model.

I’m Load The Game’s co-founder and community manager, and whenever I’m not answering questions on social media platforms, I spend my time digging up the latest news and rumors and writing them up. That’s not to say I’m all work and no fun, not at all. If my spare time allows it, I like to engage in some good old fashioned online carnage. If it’s an MMO with swords and lots of PvP, I’m most likely in it. Oh, and if you’re looking to pick a fight in Tekken or Mortal Kombat, I’ll be more than happy to assist! Connect with me by email markjudge (@) loadthegame.com only
@@MarkJudgeLTG
Previous Sense 6: have you updated your HTC One M7?
Next 5 Great Windows Phone Games you should have!