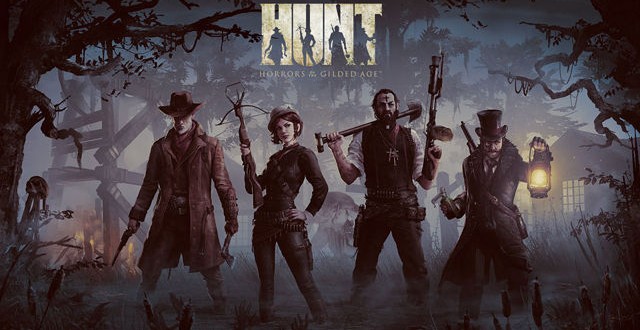 Hunt: Horrors of the Gilded Age was announced by Crytek today. The game is a four-player co-op that’s said to be “a spine-chilling new multiplayer experience on PC and consoles”. Hunt is set to take place sometime during the 1800s and has you and your friends battling undead and other monstrosities. The game’s premise revolves around a group of hunters tasked with the mission of ridding the world of the horrors that were once thought to be nothing more than myths. You are one of the few who is “willing to step beyond the brink of what is seen and stand against the encroaching darkness.” Hunt: Horrors of the Gilded Age seems to be reminiscent of Valve’s Left 4 Dead, except that it has very different setting.

Crytek’s upcoming title is described as being a “pulse pounding 4-player co-op action” game. “Crytek’s third-person thriller turns you into both hunter and hunted as you unite with up to three other players and face an onslaught of bloodthirsty creatures together. As bullets dwindle and lamplight flickers, you’ll have to work strategically as a team to stay alive – especially when you track down jaw-dropping bosses with the brains and brawn to send you and your friends to an early grave. Hunt together or die alone, it’s up to you,” the official website explains. So far it doesn’t sound like anything particularly ground breaking, but the press releases reveals a few more details.

“Adding to the thrill of the hunt is a special content generation system that ensures players never encounter exactly the same environment or set of enemies twice. As the surprises come thick and fast, the terror of knowing that one of the game’s grueling boss battles could be just around the corner will keep everyone’s pulses pounding. Defeating bosses will require close collaboration between hunters as they attempt to figure out and take down some truly terrifying monsters.” Now this sounds very exciting and looks to bring something new to the table. It’s interesting to note that Crytek announced another brand new IP just a few days go. Their other game is a MOBA that goes by the name of Arena of Fate and will feature famous characters from both history and fantasy.

Hunt: Horrors of the Gilded Age will enter Closed Beta on the PC later this year. The game was also announced to be present at E3, which takes place during 10-12 June. Stay tuned for more news and updates.

I’m Load The Game’s co-founder and community manager, and whenever I’m not answering questions on social media platforms, I spend my time digging up the latest news and rumors and writing them up. That’s not to say I’m all work and no fun, not at all. If my spare time allows it, I like to engage in some good old fashioned online carnage. If it’s an MMO with swords and lots of PvP, I’m most likely in it. Oh, and if you’re looking to pick a fight in Tekken or Mortal Kombat, I’ll be more than happy to assist! Connect with me by email markjudge (@) loadthegame.com only
@@MarkJudgeLTG
Previous Watch Dogs manages to sell 4 million copies in a single week
Next Google Chrome 64-bit Dev and Canary available for Windows