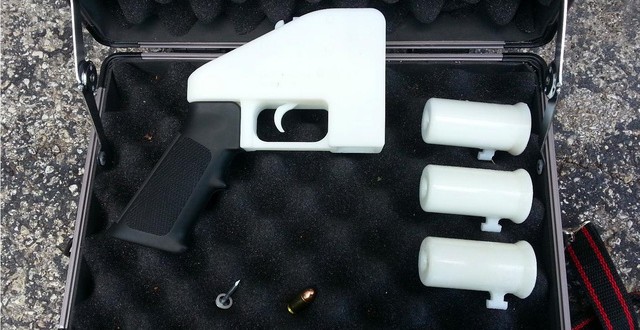 A little more than a year has passed since the first ever 3D-printed gun was fired. The pistol was developed by Defense Distributed, an online organization that designs firearms which can be downloaded from the internet. These digital weapons can then become a reality by using a 3D printer. Defense Distributed’s first working gun goes by the name of The Liberator and is made mostly out of plastic parts. The idea itself seems rather crazy and can have serious ramifications in the long run. The company justifies releasing blueprints for these guns by saying that the U.S.policy regarding gun-control is no longer viable given the current state of our technology. While this was seen by some as merely a statement regarding government laws, the working 3D-printed guns themselves are much more than that.

Last month a Japanese man built his own printed pistols based on The Liberator’s blueprints. Dubbed the ZigZag, his version of the firearm features six barrels that can house 38-caliber bullets and is for all intends and purposes a revolver. The ZigZag is more powerful than the original and is said to be potentially lethal. The police arrested the man for possession of weapons on May 8. “With the Liberator we were trying to communicate a kind of singularity, to create a moment,” says Cody Wilson, founder of Defense Distributed. “The broad recognition of this idea seemed to flip a switch in peoples’ minds…We knew that people would make this their own.”

A working 3D-printed pistol is one thing, but there are other much more dangerous weapons out there as well. Back in August, a Canadian digital gunsmith managed to build the first printed rifle. The Grizzly as he calls it, fires 22-caliber rounds and is considered to be the first improvement on The Liberator. Since then, 3D-printed versions of semi-automatic pistols like the Skorpion have also been created. Believe it or not, there is also a printed version of a semi-automatic rifle that closely resembles, and uses the same ammunition as the AK-47. Admittedly, these two weapon types are only partially 3D-printed, but you can legally purchase the rest of the components needed to build them.

3D-printers offer the possibility of building almost anything at this point. They are used in a wide variety of fields, ranging from car manufacturing to space exploration, and anything in between. It’s a shame that firearms are also among the possible applications. Hopefully these guns will be used mainly for research purposes, but somehow I doubt it.

I’m Load The Game’s co-founder and community manager, and whenever I’m not answering questions on social media platforms, I spend my time digging up the latest news and rumors and writing them up. That’s not to say I’m all work and no fun, not at all. If my spare time allows it, I like to engage in some good old fashioned online carnage. If it’s an MMO with swords and lots of PvP, I’m most likely in it. Oh, and if you’re looking to pick a fight in Tekken or Mortal Kombat, I’ll be more than happy to assist! Connect with me by email markjudge (@) loadthegame.com only
@@MarkJudgeLTG
Previous Apple iWatch rumored to launch this October
Next Google’s Nearby Feature to be introduced soon