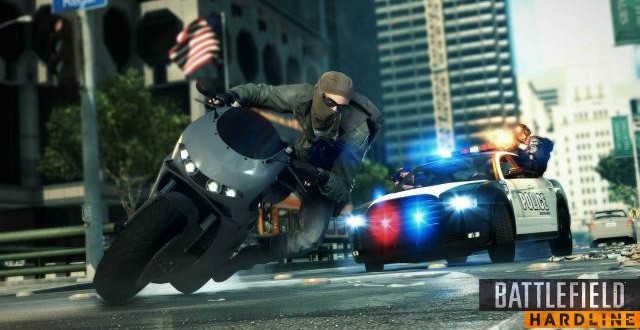 EA announced today during E3 2014 that the Closed Beta testing phase for Battlefield Hardline has begun. PC and PS4 owners can go to the official website and sign up, but hurry because the available spots are limited. Xbox One, Xbox 360 and PS3 users can’t get into the Beta right now, but there are some benefits if you sign-up anyway. Owners of the aforementioned platforms will receive some great bonuses when the game releases on October 21st, if they apply for the beta of course. The goodies include weapon skin, weapon sight, and some more bonus content for Battlefield Hardline alongside a unique dog tag for Battlefield 4.

Steve Papoutsis, executive producer for Battlefield Hardline revealed some details about the game’s Closed Beta. “New gadgets like grappling hooks and ziplines can take you across skyscrapers, and tear gas and gas masks can really affect the battle that’s going on in the streets. We’ve added fun new melee weapons in the game with bats and batons and added a new mechanic in multiplayer called interrogation that fits more in line with the cops and criminals fiction. Not to mention we have our own methods to destruction and set of police and getaway vehicles including a police bearcat armored truck, fast muscle cars and of course street bikes.”

Closed Beta offers access to the High Tension map and the Heist and Blood Money game modes. While we already know a lot about the game’s multiplayer, the same thing can not be said about its single player component. Papoutsis just said that the campaign will feature quality story-telling and will be more in-depth than those of typical shooters. “We are bringing the Visceral story-telling pedigree that we learned with Dead Space to the campaign of Battlefield Hardline. This will be a more personal experience than your typical shooter with compelling characters, a deeper story and production value like a great crime drama. That’s all I can say about singleplayer for now but keep your eyes peeled for more in the months ahead.”

Revealed last month, Battlefield Hardline will be the start of a brand new series in the popular franchise. This is the first Battlefield title that’s not being developed by DICE. Visceral Games (creators of the Dead Space series) will be handling this project. The game is scheduled to be released on October 21st for PS3, PS4, Xbox 360, Xbox One, and the PC. Stay tuned for more news and E3 2014 coverage.

I’m Load The Game’s co-founder and community manager, and whenever I’m not answering questions on social media platforms, I spend my time digging up the latest news and rumors and writing them up. That’s not to say I’m all work and no fun, not at all. If my spare time allows it, I like to engage in some good old fashioned online carnage. If it’s an MMO with swords and lots of PvP, I’m most likely in it. Oh, and if you’re looking to pick a fight in Tekken or Mortal Kombat, I’ll be more than happy to assist! Connect with me by email markjudge (@) loadthegame.com only
@@MarkJudgeLTG
Previous E3 2014: Next Mass Effect details revealed by Bioware
Next E3 2014: GTA 5 coming to PC, PS4, and Xbox One this Fall