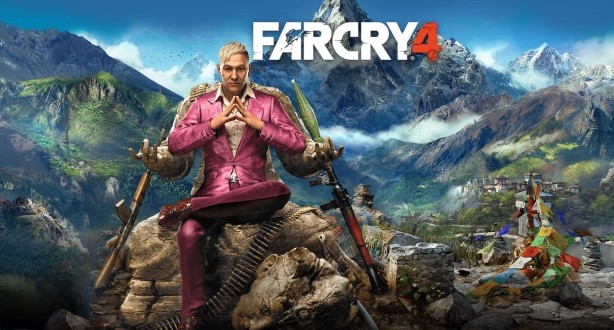 Ubisoft kicked off their E3 2014 press conference by presenting the first gameplay trailer for the highly anticipated Far Cry 4. Ever since the box cover was first revealed everybody has been talking about the game’s unusual looking villain. After watching the video you’ll probably forget all about the stylish outfit and just think of him as the “insane dude who enjoys stabbing soldiers and taking selfies”. We would normally advise you not to judge people by their appearances, but after seeing Pagan Min we think you should be careful around men that like to wear pink suits. All jokes aside, the trailer is really awesome so just go ahead and watch it.

In addition to getting a first glimpse of the antagonist, we’ve also learned that Far Cry 4 will feature a co-op mode. Interestingly enough, you will be able to play the campaign with a friend even if he or she doesn’t actually own the game. This was revealed to be a feature available only for the PlayStation Network so you will have to own a PS4 or PS3 version of Far Cry 4 in order to invite somebody to join you. Some other features that come with the game include the ability to use grappling hooks, kick explosive barrels, and ride gyrocopters. In regards to the premise of Far Cry 4, Ubisoft describes it as follows:

“Hidden in the towering Himalayas lies a country steeped in tradition and violence. You are Ajay Ghale, returning to the country of your birth, the lush forests and harsh snowcapped summits of Kyrat, to fulfill your mother’s dying wish of spreading her ashes. This striking and unpredictable country offers visitors opportunity and peril. You quickly find yourself caught up in a rebellion to overthrow the oppressive regime of Pagan Min, a man known as much for his sense of style and charisma as his cruelty and calculated brutality. Navigating the treacherous landscape, you find your fate increasingly determined by the choices you make because in Kyrat, every second is a story.”

Far Cry 4 will be released on November 18th for PS3, PS4, Xbox 360, Xbox One, and the PC. Pre-ordering the title from GameStop by July 15th will grant you a free Limited Edition upgrade. This edition includes three bonus missions, an exclusive Blood Ruby Mission, as well as a harpoon gun. Stay tuned as we bring you all the latest news and updates.

I’m Load The Game’s co-founder and community manager, and whenever I’m not answering questions on social media platforms, I spend my time digging up the latest news and rumors and writing them up. That’s not to say I’m all work and no fun, not at all. If my spare time allows it, I like to engage in some good old fashioned online carnage. If it’s an MMO with swords and lots of PvP, I’m most likely in it. Oh, and if you’re looking to pick a fight in Tekken or Mortal Kombat, I’ll be more than happy to assist! Connect with me by email markjudge (@) loadthegame.com only
@@MarkJudgeLTG
Previous E3 2014: Destiny PS4 beta begins July 17th
Next The Order 1886 gameplay trailer, release date, and features