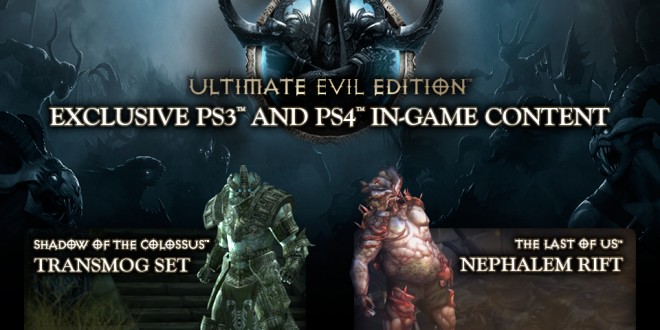 Blizzard Entertainment revealed the content that only PS3 and PS4 owners will be able to enjoy once Diablo 3 Ultimate Evil Edition comes out. The company announced that they have teamed up with Naughty Dog in order to bring the PS3 hit title The Last of Us to Sanctuary. No, this isn’t some sort of port but rather a unique Naphalem Rift featuring creatures modeled after the Stalker, Clicker, and Bloater infected. The new Rift comes complete with “hand-picked environments from the Diablo III universe and an ominous yellow spore effect.”

The other piece of PS4 and PS3 exclusive content comes in the form of an armor set inspired by the classic PS2 title Shadow of the Colossus. Entitled “Guise of the Colossi”, the set of transmogrification plans features six armor appearances that will be available for each of the classes found in Diablo 3. Blizzard mentions that this really is exclusive content and can not be transferred to any other platform. They also say that you will need to connect to the PlayStation network in order to redeem these rewards. Diablo 3 Ultimate Evil Edition can already be pre-ordered for the price of $60.

This enhanced version of Diablo 3 will be arriving on August 19th for PS3, PS4, Xbox 360, Xbox One, and the PC. Ultimate Evil Edition includes the core game and its Reaper of Souls expansion, and will add some new features to the game. These include a four-player co-op mode, PS3 to PS4 (Xbox 360 to Xbox One) character transfer, as well as an exclusive new item for those who pre-order. This item goes by the name of Infernal Pauldrons and grants Health, Life regeneration and Cooldown reduction. The shoulderplates will be available on launch day for Diablo 3 Ultimate Evil Edition and are not transferable across platforms. Additionally, Ultimate Evil Edition also adds some new content to the game, which can be viewed below.

As a side note, Patch 2.0.6 was just released for Diablo 3 and comes with a lengthy list on changes. You can read the full patch notes here. Stay tuned for more news and updates.

I’m Load The Game’s co-founder and community manager, and whenever I’m not answering questions on social media platforms, I spend my time digging up the latest news and rumors and writing them up. That’s not to say I’m all work and no fun, not at all. If my spare time allows it, I like to engage in some good old fashioned online carnage. If it’s an MMO with swords and lots of PvP, I’m most likely in it. Oh, and if you’re looking to pick a fight in Tekken or Mortal Kombat, I’ll be more than happy to assist! Connect with me by email markjudge (@) loadthegame.com only
@@MarkJudgeLTG
Previous Uncharted 4: A Thief’s End might be the final entry in the series
Next LG G3 US release date revealed, phone is enjoying massive success in Asia