Breaking News
Home » Tech » Moto E gets price cuts on Amazon and Android 4.4.3 KitKat – is it now a good deal? 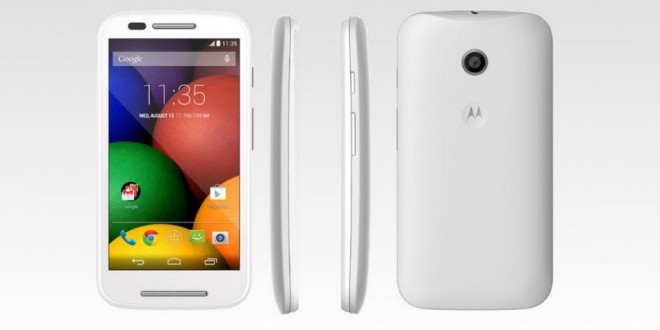 Moto E gets price cuts on Amazon and Android 4.4.3 KitKat – is it now a good deal?

The Moto E is one of the best entry-level smartphone on the market right now and is more affordable than ever. If you were looking for a great secondary smartphone or even a primary one that can deliver a decent Android experience, you must have considered buying the Moto E. Now’s your chance to get it on Amazon, as it’s now as cheap as ever. Amazon is selling both the Global GSM and US GSM versions for only $129.99 with free shipping. No one knows for how long Amazon’s stock will hold so it’s best to take advantage of it while you can. If you order the device (Global or US GSM version) at the time this article was written, Amazon will ship it to you by Tuesday, June 17. The color choice is not great as it’s only available in Black and White, but from an entry-level phone, that’s expected.

The Moto E runs on Android 4.4.2 KitKat out of the box but received the Android 4.4.3 update recently. The new update brings several stability, framework and security fixes to the Moto E and accuracy improvements to the power profile. It also includes an updated phone dialer, with new colors and graphical layout to improve usability and consistency. The new KitKat update won’t bring lot of visual changes, most of the changes will be under the hood.

For its current price the Moto E is worth picking up. It’s not a perfect phone and is missing a few features but for its current price its a decent deal. We would recommend you to buy it as soon as you can, before it runs out of stock on Amazon. In case you want to buy it right now, fell free to use the provided links:

Tech enthusiast and RPG gamer, I've been surrounded by technology and PC hardware my entire life. I'm fascinated by anything mobile, and when I'm not tinkering with some newly released gadget, I love to immerse myself in the epic tales of Role Playing Games.
Previous Price, Specs and Features available for the Moto 360
Next Nokia’s plans for the Lumia 930 and new Windows phones leaked