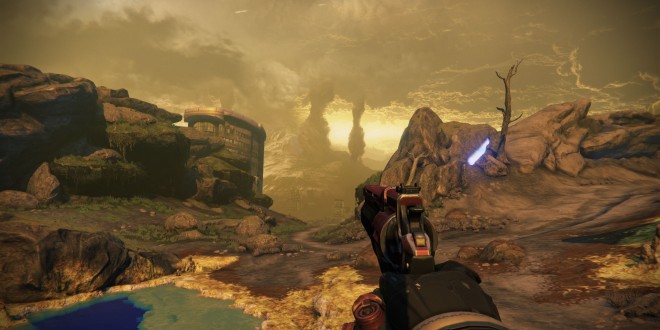 Destiny has limited frame rate due to cross-platform play

When Destiny releases later in the year it won’t look as smooth as many gamers were expecting. Both next generation console versions of the title will only run at 30 frames per second, just like their Xbox 360 and PlayStation 3 counterparts. A Bungie employee has now revealed that this is largely due to the cross-platform nature of the game.

Speaking to VentureBeat, Jason Sussman, a senior envornment artist at Bungie, explained why Destiny only runs at 30fps on both next generation consoles. “It’s a lot of different things. I could get really technical, but I’d bore you to death,” said Sussman. “A lot has to do with performance. We’re cross-platform, so we had to be very delicate with all four consoles, making sure they have the same experience, that it looks as good as it possibly can on all these consoles. A lot goes into that, from geometry to textures to post effects to particles to how many players you get on the screen. We’re always balancing that out to make sure everyone gets the same experience.”

A lot of fans who were looking forward to seeing Destiny at its absolute best will probably be upset that it has been limited in such a way. Especially considering that many other recently released games have taken advantage of the superior hardware of the Xbox One and PlayStation 4 to ensure games are running at 60fps. Bungie’s game has seen plenty of action at E3. The developer first announced that a public beta will begin on the two PlayStation consoles on July 17th before going on to open up an alpha version of the game for people to play. They then decided to extend the alpha to allow for additional testing and have released a wealth of additional media such as trailers and screenshots.

Destiny releases September 9th on Xbox One, PlayStation 4, Xbox 360 and PlayStation 3. Bungie has considered a PC version but they have yet to decide whether to release it on that platform.

Freelance writer with a love for gaming. Have owned pretty much every console and handheld from the last 15 years. When I'm not writing about games, which I am most of the time, I tend to be reading, writing about sport, binge watching shows on Netflix...or playing the odd video game.
@nathanpgibson
Previous 343 gives some details on Halo 5’s mystery character
Next Capcom Now Open To Buyout