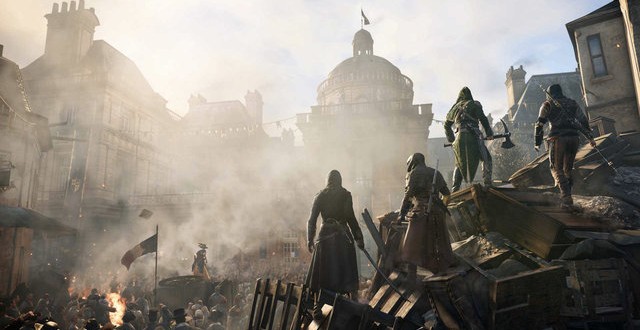 The latest trend for developers is to target 1080p resolution and 60 frames per second on PS4 /Xbox One for all their upcoming games and Ubisoft is no exception. The company revealed in an interview with GamingBolt that Assassin’s Creed Unity is one of their titles that will reach the magic numbers. AC Unity level designer Bruno St. Andre was uncertain at first if those were indeed the targeted resolution and frame rate, but he eventually managed to confirm it. They will likely make it happen for the PS4, however the Xbox One version might be a little more challenging. Luckily this month’s SKD update comes with some improvements, which allow for a performance boost on the console so that might help Ubisoft with their endeavor.

The previous title, Assassin’s Creed Black Flag was able to run at 1080p on the PS4 after a day-one patch. The Xbox One version did not feature the same resolution, but the devs seem keen on making it happen for both next-gen consoles this time around. As for the PC version of Assassin’s Creed Unity, you will most definitely get 1080p and 60 fps or more if your machine can handle it, but this is always the case with this platform so no surprises there. The system requirements have not been revealed yet so we can only speculate for the moment. Sources suggest that we should expect something like an Intel Core 2 Quad Q9450 @ 2.66GHz(or equivalent), Nvidia GeForce GTX 560(or equivalent), 6GB of RAM, and about 20GB of Hard Disk space. However, these are not confirmed yet so we have to wait for an announcement from Ubisoft before we know for certain.

Assassin’s Creed Unity is the first title in the franchise to come exclusively to next-gen so no PS3 or Xbox 360 I’m afraid. The game is set in Paris during the French Revolution and will have you playing as a brand new assassin that goes by the name of Arno. We found out at E3 that the upcoming title will feature four-player co-op and we’ve also seen the brand new parkour mechanics in action. Movement is overall more fluid and you will feel a lot more agile in Assassin’s Creed Unity than you did in the previous installations. Ubisoft is also working on a last-gen only title called Assassin’s Creed Comet, but they haven’t revealed much about it. We’ll let you know as soon as we learn something important.

Assassin’s Creed Unity will be released on October 28th for PS4, Xbox One, and the PC. Stay tuned for more news and updates.

I’m Load The Game’s co-founder and community manager, and whenever I’m not answering questions on social media platforms, I spend my time digging up the latest news and rumors and writing them up. That’s not to say I’m all work and no fun, not at all. If my spare time allows it, I like to engage in some good old fashioned online carnage. If it’s an MMO with swords and lots of PvP, I’m most likely in it. Oh, and if you’re looking to pick a fight in Tekken or Mortal Kombat, I’ll be more than happy to assist! Connect with me by email markjudge (@) loadthegame.com only
@@MarkJudgeLTG
Previous Team Fortress 2 Love and War update is now live
Next Latest Watch Dogs patch starts rolling out for PC