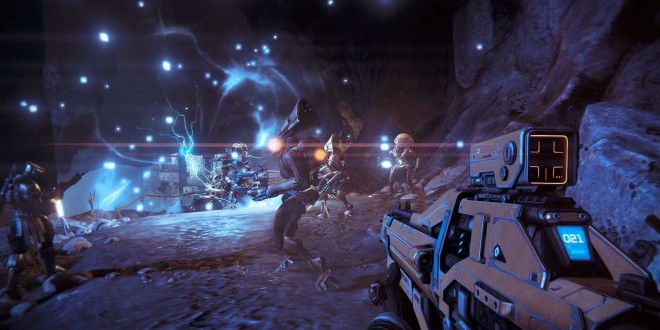 Bungie has revealed a wealth of stats following the end of their alpha for Destiny. In total, there were over 190 million kills with all weapons and an impressive 667,966 public events. All in all users of the alpha managed to play over 6 million games in just a few days. The developer went on to explain that the alpha had been invaluable in collecting data and to ensure that the beta will run smoothly. They also promised that the beta will show off much more of the game that wasn’t available in the alpha. Finally, Bungie has also revealed a new T-shirt for the game. It can be bought from their official store with all profits from it going to charity.

The alpha first released earlier in the month and was initially slated to last for only a weekend. However, they then extended it to perform additional tests on June 16 allowing players to try out the game for a little bit longer. The full beta for the PlayStation 4 and 3 will launch July 21 with an Xbox One version to follow some time later.

Earlier last week, Bungie announced that Destiny would not run at 60 frames per second on Xbox One and PlayStation 4 despite the superior hardware on those consoles. They explained that this was largely due to the cross-platform ability, so that players will experience the same game on all consoles.  The past several weeks have seen a deluge of information about the upcoming first person shooter. Announcements have included the fact that Bungie’s latest game is the most expensive in history, eclipsing Grand Theft Auto V with a $500 million budget.

Destiny will release September 9 for the PlayStation 4, Xbox One, PlayStation 3 and Xbox 360. Although a PC version of the game has been discussed internally by the developer they have not yet announced whether it will see a release on the platform. Any release on PC might see a delay until after the console versions in order to allow Bungie to fully concentrate on polishing the game.

Freelance writer with a love for gaming. Have owned pretty much every console and handheld from the last 15 years. When I'm not writing about games, which I am most of the time, I tend to be reading, writing about sport, binge watching shows on Netflix...or playing the odd video game.
@nathanpgibson
Previous Civilization Revolution 2 Coming to iOS
Next Battlefield 3 players have been incorrectly banned