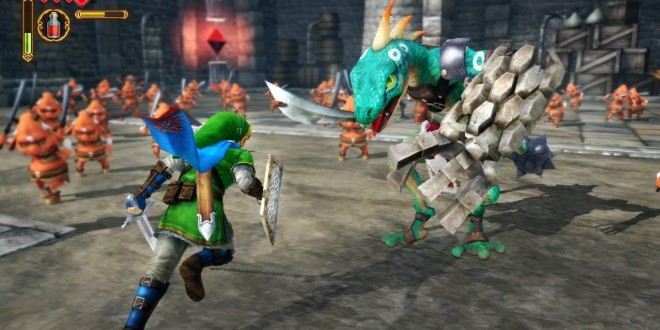 Zelda for Wii U may see multiplayer mode

The latest Legend of Zelda game that will release on the Wii U in 2015 may have some sort of multiplayer aspect. Speaking about the upcoming Hyrule Warriors, series producer Eiji Aonuma hinted that the multiplayer from that game may be something that could make its way into the next full Zelda title.

“The two-player functionality of Hyrule Warriors is actually something that has traditionally been done in the Dynasty Warriors series, but they’ve changed because of the hardware and the second screen on your GamePad. Instead of having a splitscreen on the television, you have one-player playing on the television and one on the GamePad,” said Aonuma. “When I was talking back about making Zelda more than just a single-player experience? That’s something you will see in the future, maybe next year.”

Multiplayer isn’t new in the Zelda series. In fact, there have been previous releases that have focused on multiplayer over single player such as Four Swords. However, there has never been a multiplayer aspect in any of the main games of the franchise. Aonuma didn’t go into any detail as to what type of multiplayer we could see in next year’s game, although some sort of co-operative gameplay would seem most likely.

The new Legend of Zelda game was first revealed at E3 earlier in the month. The trailer showed off the new HD graphics along with Epona and hero Link being chased by a laser-shooting monster. The title doesn’t yet have a firm release date with Nintendo instead stating that it will come out at some point next year.

Hyrule Warriors is a mash up of Zelda and Dynasty warriors. Players will be able to take control of a variety of characters from the series as they battle waves of enemies. The hack and slash gameplay focuses much more on combat than previous Zelda games. It is set to release in September for the Wii U.

Freelance writer with a love for gaming. Have owned pretty much every console and handheld from the last 15 years. When I'm not writing about games, which I am most of the time, I tend to be reading, writing about sport, binge watching shows on Netflix...or playing the odd video game.
@nathanpgibson
Previous Samsung launching new Android Wear smartwatch
Next Nintendo considering bringing Minecraft to their platforms