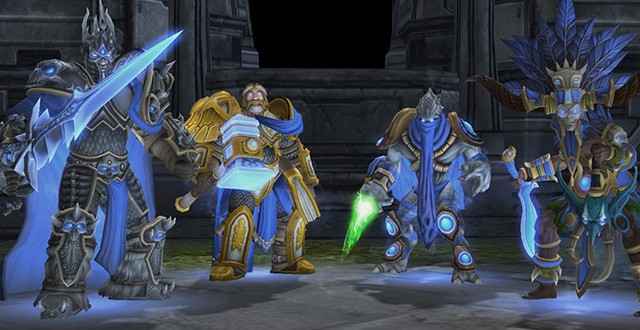 Blizzard implements new XP system for Heroes of the Storm

Heroes of the Storm is still in its Technical Alpha testing phase, which means that there’s still plenty of work to be done and the game will likely undergo lots of changes until it’s ready for launch. The most recent change is aimed at the experience system. Until now Blizzard used something called bonus trickle xp, but in light of recent player feedback the company decided to try out something different. The new system goes by the name of Underdog Bonus and will be implemented in the next patch. The idea behind it is very simple and should bring a lot of balance to Heroes of the Storm, but I’m sure that it was also raise some concerns.

Underdog Bonus basically allows the team that’s behind to quickly catch up with their opponents. The “underdogs” will receive bonus experience every time an enemy hero is killed, which should allow them to get back into the game in no time. The amount of experience gained scales significantly based on how many levels apart the teams are, and is capped at four-level difference. Bonus experience will be granted until the two teams are even in terms of levels. I’ve mentioned that the Underdog Bonus is likely to raise some concerns among Heroes of the Storm players and here’s why.

The team that’s ahead will now gain fewer experience points for each hero kill. This reduction also scales accordingly, similar to the gain. This change will definitely make Heroes of the Storm matches more unpredictable as you can never be certain that the leading team is going to win. Although the team that’s behind is clearly at a disadvantage they can quickly catch up by pilling together and getting a few hero kills. While this will make the game more balanced, it will also pretty much negate the leading team’s advantage. Heroes of the Storm will probably feel less punishing and games are likely to last longer once the Underdog Bonus will be implemented. One the other hand, maybe that’s exactly what they were going for in the first place.

Blizzard seems to be aware that this may cause some problems and are reminding us that Heroes of the Storm is still in Alpha so the feature might not make it into the full game. “We realize there are pros and cons to the bonus trickle XP and Underdog Bonus systems alike, and we’d like to remind you that none of this is final. We’re ultimately not yet sure which we’ll wind up using, or if there’s a third option worth trying in the future, but we are trying to find the best solution we can. We’ll continue to review playtest data, as well as your feedback, and make any additional changes as needed while we work toward this goal.”

The company announced earlier this month that Heroes of the Storm will enter its next Alpha phase soon. Blizzard will be sending a batch of invitations for players outside the US in the near future so go here and sign up for a change to receive one. Stay tuned for more news and updates.

I’m Load The Game’s co-founder and community manager, and whenever I’m not answering questions on social media platforms, I spend my time digging up the latest news and rumors and writing them up. That’s not to say I’m all work and no fun, not at all. If my spare time allows it, I like to engage in some good old fashioned online carnage. If it’s an MMO with swords and lots of PvP, I’m most likely in it. Oh, and if you’re looking to pick a fight in Tekken or Mortal Kombat, I’ll be more than happy to assist! Connect with me by email markjudge (@) loadthegame.com only
@@MarkJudgeLTG
Previous Metro Redux release date announced
Next Family Sharing and other Xbox One features still on the way