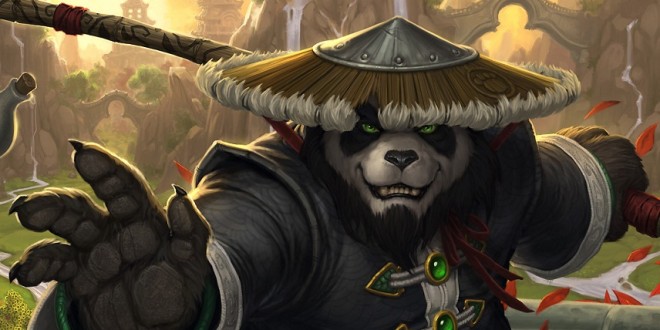 A World of Warcraft player has achieved something that no other player in the game’s history has achieved previously: hitting the level cap without choosing a faction. The man’s name is Doubleagent–at least that is his character’s name–hit the level 90 cap on June 21, 2014 without choosing to be a member of the Horde or the Alliance. How did he do it, you ask? With the latest Mists of Pandaria expansion, players that choose to play as the Pandaren race start their journey neutral to both factions until they are asked to choose a side at level 10. Without choosing a faction, the player is stuck inside a gated starting area and cannot continue questing.

However, there are herbs and mining nodes that spawn in the zone, which is what Doubleagent used to hit level 90. These low level herb and mining nodes offer XP–very little XP–which became Doubleagent’s sole source of leveling juice after all quests in the area were completed and mobs no longer provided experience. It took the dedicated player 173.5 days of playtime, or 4,164 hours, to achieve the goal, which originally began as a challenge from a friend back in September 2012.

Doubleagent attributes “TV shows and movies that [he] needed to catch up on” for his unique victory, for without which it would’ve been an even tougher grind. The player took to an unofficial World of Warcraft forum, Blizzposts, to say that he plans to hit level 100 without leaving the starter area when the Warlords of Draenor expansion releases later this year.

Doubleagent chronicled his journey on the forum, saying that he got 20 experience for every Peacebloom, Silverleaf, or Copper node, and 30 experience for every Earthroot. He was able to maintain a rested XP for a majority of his journey after reaching higher levels. Thus, because of his truly unique achievement achieved through unwavering dedication, we give Doubleagent major kudos and an official internet high five.

I’m Load The Game’s co-founder and community manager, and whenever I’m not answering questions on social media platforms, I spend my time digging up the latest news and rumors and writing them up. That’s not to say I’m all work and no fun, not at all. If my spare time allows it, I like to engage in some good old fashioned online carnage. If it’s an MMO with swords and lots of PvP, I’m most likely in it. Oh, and if you’re looking to pick a fight in Tekken or Mortal Kombat, I’ll be more than happy to assist! Connect with me by email markjudge (@) loadthegame.com only
@@MarkJudgeLTG
Previous 5.5-inch Nexus 6 rumored to be in the works and will be released this year
Next LeapFrog Unveils LeapPad 3 And LeapPad Ultra XDi