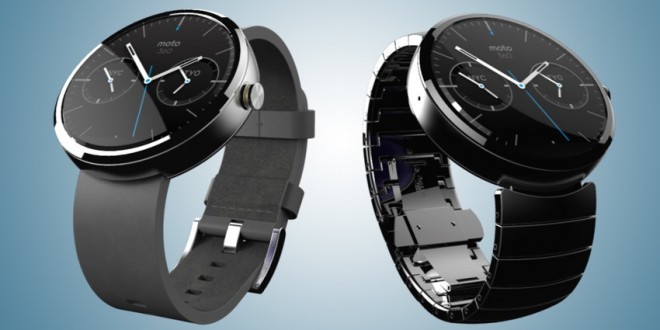 An FCC filing seems to suggest that the Moto 360 smartwatch will support wireless charging. The filing shows the device will be compatible with most QI wireless chargers rather than the rival Duracell standard. This would certainly make it easier for people to keep the smartwatch charged. The Moto 360 is Motorola’s answer to the smartwatch market that has just begun to take off. Although the company has been quiet on specific details some information has been released. The device will use sapphire glass, favored by Swiss watchmakers because of its durability and scratch resistance, in combination with a round OLED display. It will also come with Android Wear, Google’s version of Android for wearable devices.

Current speculation suggests that the Moto 360 will also be compatible with other Motorola products such as smartphones and tablets. However, it should also work with any other Android device. It is also expected that the smartwatch will be both dust and water resistant. Google will be showing off a range of smartwatches over the next few days at the Google IO, including the LG G Watch and a possible Samsung device. That means that we should get full specifications of the Moto 360 and other smartwatches very soon.

While digital watches have been around since the 70’s, recent strides in technology have only allowed fully functioning smartwatches to become marketable. The new models, many of which run Android, feature a number of applications including GPS tracking, emails and recording of data. While many work as stand-alone devices most can also interact with other technology, such as smartphones and tablets to offer enhanced features and to share information. This means that you would be able to see SMS messages and other alerts your phone has received through your smartwatch, negating the need to have your smartphone out all of the time.

Freelance writer with a love for gaming. Have owned pretty much every console and handheld from the last 15 years. When I'm not writing about games, which I am most of the time, I tend to be reading, writing about sport, binge watching shows on Netflix...or playing the odd video game.
@nathanpgibson
Previous Google Play revenue is almost all from Freemium apps
Next Soundhawk aims to let you hear exactly what you want