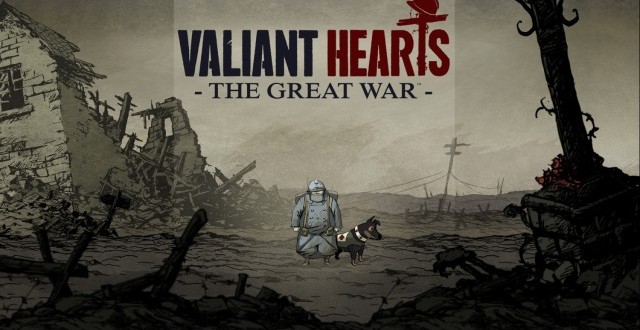 Valiant Hearts: The Great War, a new puzzle adventure game developed by Ubisoft will be releasing today for PS3, PS4, Xbox 360, Xbox One, and the PC. Ubisoft’s latest addition caught the attention of more than a few people when it was presented at this year’s E3. The upcoming title is set during World War 1 (hence the subtitle The Great War) and focuses on four characters that will give us a new perspective on important values such as love and friendship. Although the game takes place during one of the most grim periods of history, Valiant Hearts is not so much about the war itself as it is about the people caught up in these tragic events and the sacrifices they were forced to make.

“Valiant Hearts : The Great War is the story of 4 crossed destinies and a broken love in a world torn apart. Dive into a 2D animated comic book adventure, mixing exploration, action and puzzles. Lost in the middle of the trenches, play as each of the 4 strangers, relive the War and help a young German soldier find his love. Following your faithful canine companion, you will play each character story mixing friendship, love, sacrifice, and tragedy in the horror of the Great War.” The game’s key features include:

Valiant Hearts: The Great War will be available for download via Steam, UPlay, Xbox Live, and PlayStation Network, and can be purchased for $15. Stay tuned for more news and updates.

I’m Load The Game’s co-founder and community manager, and whenever I’m not answering questions on social media platforms, I spend my time digging up the latest news and rumors and writing them up. That’s not to say I’m all work and no fun, not at all. If my spare time allows it, I like to engage in some good old fashioned online carnage. If it’s an MMO with swords and lots of PvP, I’m most likely in it. Oh, and if you’re looking to pick a fight in Tekken or Mortal Kombat, I’ll be more than happy to assist! Connect with me by email markjudge (@) loadthegame.com only
@@MarkJudgeLTG
Previous GTA Online Heist missions details and new DLC leaked
Next Google takes their OS to the streets with Android Auto