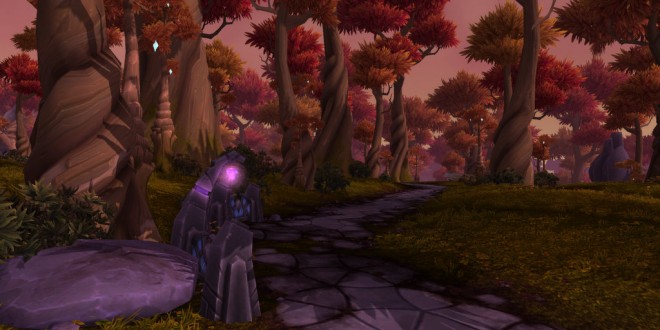 A new area that is coming to World of Warcraft through the Warlords of Draenor expansion has been shown by Blizzard. The Tanaan Jungle is one of the largest areas you’ll be able to enter in the latest expansion and is home to a number of Orc heroes. Speaking on its blog Blizzard spoke what players can expect from the new setting: “Your first steps into Draenor will be within the wilds of Tanaan Jungle, where the Iron Horde has staged their assault on Azeroth.”

“Shutting down the Dark Portal is your first priority, but the mission may quickly go awry. Even if you do manage to seal the portal, your party will still be trapped in the middle of a hostile army.Your only option is to fight your way out. You might even be forced to accept the help of the infamous Gul’dan. Fortunately, you’ll also have luminaries such as Thrall, Khadgar, and Vindicator Maraad by your side.”

Warlords of Draenor is the fifth expansion to the MMO and the first since 2011’s Mists of Pandaria. It is due to release in Fall of 2014 and brings a number of new features as well as additional content. One of the biggest changes the expansion will make to the game is that it will increase the level from 90 to 100 as well as allowing for player-built garrisons. However, the most important change comes to the visuals, which have largely gone unchanged since the original release of the game in 2004. The upgraded visuals will improve the looks of numerous player models with better textures and a higher polygon count.

It was announced yesterday that World of Warcraft would be receiving a massive discount. The stand-alone game and the expansions Burning Crusade, Wrath of the Lich King and Cataclysm can be bought for just $10. Paying an additional $10 will also give access to Mists of Pandaria. Warlords of Draenor is also available to pre-order from the Blizzard store for $50, while the Digital Deluxe Edition clocks at $70 but comes with a level 90 character boost and a number of other in-game bonuses.

Freelance writer with a love for gaming. Have owned pretty much every console and handheld from the last 15 years. When I'm not writing about games, which I am most of the time, I tend to be reading, writing about sport, binge watching shows on Netflix...or playing the odd video game.
@nathanpgibson
Previous Snapchat rival Slingshot now available worldwide
Next PlayStation Now coming to select Sony televisions this month