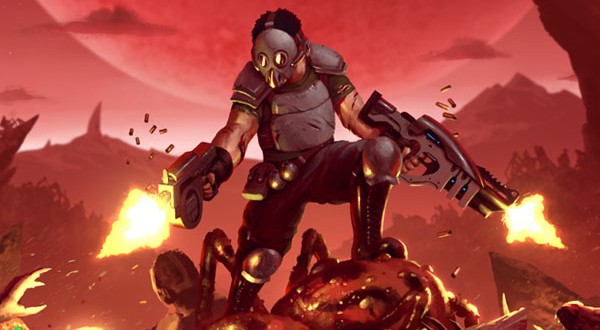 An updated version of 2003’s Crimsonland is coming to the PlayStation 4 on July 15th, Finnish developer 10tons has revealed in a PlayStation Blog post. The classic top-down twin-stick shooter started as a student project for the PC, but its success spawned a company that now has nearly three dozen games under its belt. Now the guts, gore, and immaculately-paced action that made the original game so thrilling will be making its debut on a modern console. The port will offer revamped HD graphics, new content, a co-op mode, and a few design tweaks, but 10tons claims the gameplay is mostly unaltered from the original.

“It’s a big deal for us at 10tons, for a whole bunch of reasons,” wrote 10tons ltd PR coordinator Jaakko Maaniemi. “First of all, Crimsonland is an incredibly fun, dual-stick, top-down shooter. It’s exactly the kind of game we love playing and developing. It’s delightfully old school, too, with plenty of splatter, gibs, and challenge.

Crimsonland has a simple recipe; the player is dropped in the center of the map and can move around and shoot to avoid monsters that spawn at the edges and attack. The brilliance of the design is that power-ups are most likely to appear right when the hoard has grown to an unstoppable size. It’s a simple design done very well, and it will be interesting to see if it still has the same appeal on the PS4. Crimsonland has already been remastered for modern PCs, and launched a successful Greenlight campaign to arrive on Steam last fall.

The new features include a wider selection of 30 weapons and the addition of 55 perks: special abilities that help a player load faster or shoot poison bullets. Players can only take a few of them, and those they choose will be selected from a shortlist before the game so not all the perks will be available each game. Crimsonland will boast a sixty mission campaign with three difficulty settings, and five survival gameplay modes. 10tons has provided dedicated leaderboards for both single player and co-op.

I’m Load The Game’s co-founder and community manager, and whenever I’m not answering questions on social media platforms, I spend my time digging up the latest news and rumors and writing them up. That’s not to say I’m all work and no fun, not at all. If my spare time allows it, I like to engage in some good old fashioned online carnage. If it’s an MMO with swords and lots of PvP, I’m most likely in it. Oh, and if you’re looking to pick a fight in Tekken or Mortal Kombat, I’ll be more than happy to assist! Connect with me by email markjudge (@) loadthegame.com only
@@MarkJudgeLTG
Previous FIFA 15 trailer shows graphical overhaul
Next Age of Empires Online officially shut down