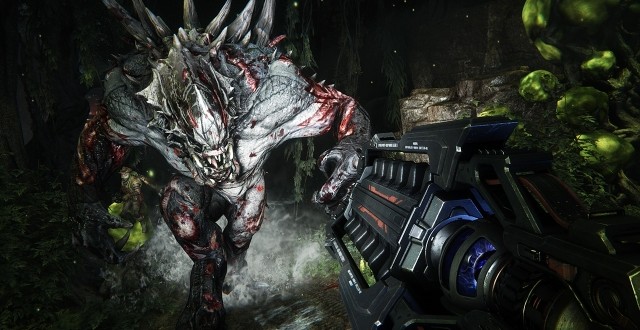 Evolve Alpha has arrived, only NA residents eligible for now

Turtle Rock Studios and 2K Games have just announced that Evolve will be entering the Alpha testing phase very soon. Those who wish to participate must meet a few requirements in order to be considered eligible for testing. First off, you must be located in mainland North America. Next, you must own a PC capable of running Evolve (we’ve posted the system requirements below) and provide a working Steam account. Other requirements include the ability of supporting a large coordinated user test on the game and be willing to adhere to a non-disclosure agreement.

You will also have to complete a short survey before anything else, which can be found here. It will ask you for a password, which Turtle Rock has provided earlier via Twitter. The password is “happyhunting”. You might also find the “JoinTheHunt” Referral Code to be useful at one point. Also provided via Twitter. Last but not least, completing all of these steps does not guarantee that you will be among those selected to participate in the Evolve Alpha, you will have to wait for an email from the company in order to find out.

Turtle Rock is hoping to have the participants list ready by July 5th so time is of the essence. Also, they mention that you should “sign-up on the PC you plan on using for the test and provide details of your hardware setup in the survey.” As promised, here are Evolve’s minimum system requirements. Note that these are not official as Turtle Rock has not announced them yet, but most sources suggest that you will need something along the lines of:

Evolve will be released on October 21st for PS4, Xbox One, and the PC.

I’m Load The Game’s co-founder and community manager, and whenever I’m not answering questions on social media platforms, I spend my time digging up the latest news and rumors and writing them up. That’s not to say I’m all work and no fun, not at all. If my spare time allows it, I like to engage in some good old fashioned online carnage. If it’s an MMO with swords and lots of PvP, I’m most likely in it. Oh, and if you’re looking to pick a fight in Tekken or Mortal Kombat, I’ll be more than happy to assist! Connect with me by email markjudge (@) loadthegame.com only
@@MarkJudgeLTG
Previous ‘Right to be forgotten’ leads Google to remove embarrassing news stories
Next Google Play Services 5.0 rolling out with dedicated Android Wear apps section