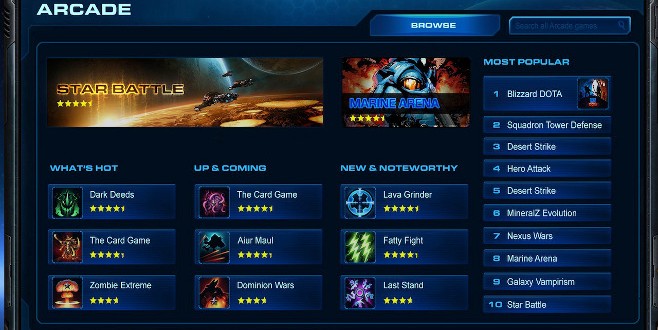 Blizzard Entertainment revealed the top 10 Arcade games of their Starcraft 2 Rock the Cabinet contest. As part of the contest, players get to check out the ten arcade games and cast their vote for a chance to win some neat Starcraft 2 prizes. Rock the Cabinet is Blizzard’s way of rewarding community created content. Most of the games you’ll find in the Arcade section have been created by players and can even be played for free. In case you don’t own the game, all you have to do is install the Starcraft 2 Starter Edition and jump right in. The top 10 contest entries can be found below.

If you like Starcraft 2 Arcade games definitely check them out and vote for your five favorite ones here for a chance to win Funko Pop! Raynor and Kerrigan Vynil figurines, Zergling/Baneling plushies, and StarCrafts hoodies.

I’m Load The Game’s co-founder and community manager, and whenever I’m not answering questions on social media platforms, I spend my time digging up the latest news and rumors and writing them up. That’s not to say I’m all work and no fun, not at all. If my spare time allows it, I like to engage in some good old fashioned online carnage. If it’s an MMO with swords and lots of PvP, I’m most likely in it. Oh, and if you’re looking to pick a fight in Tekken or Mortal Kombat, I’ll be more than happy to assist! Connect with me by email markjudge (@) loadthegame.com only
@@MarkJudgeLTG
Previous Lords of the Fallen lands October 31st on PS4, Xbox One and PC
Next Free-to-play MMO shooter Firefall launches July 29th