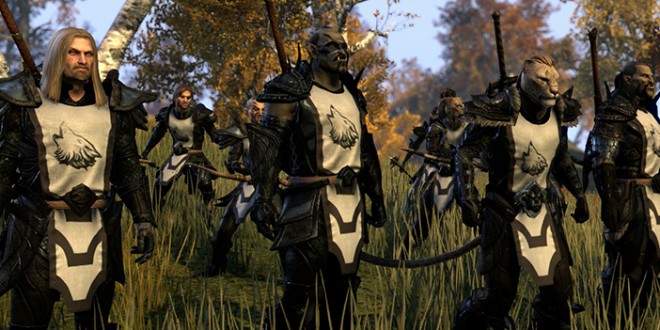 Bethesda released a preview video of Update 3 for Elder Scrolls Online and from the looks of it, the next patch is all about the Guilds. The update comes with additions such as armor dyes, tabards, heraldries, bank gold, and other Guild-related features. If you’ve played World of Warcraft or other similar MMORPGs before then this will feel all too familiar. Aside from Guild features, the most important change revolves around the Campaigns. Bethesda announced that all the Campaigns that were running up until patch 1.3 have been closed and five brand new Campaigns have been added:

Elder Scrolls Online Update 3 is not only about major changes though, some minor ones have also been implemented, such as the Instant Weapon Swap for example. This is exactly what it sounds like, which means that combat will now feel much more responsive given that there are no more delays when swapping between sets. Patch 1.3 also comes with some visual improvements to the game, mostly revolving around brightness, contrast, and color curves. These changes will be more noticeable in some locations and less so in others, but either way they shouldn’t affect performance at all.

Last but certainly not least, optional difficulty modes have been added to the final fights in Aetherian Archive and Hel Ra Citadel. “Look for clues near each Celestial to find out how to trigger this new mode. When you complete the difficult version of a Trial, you will be rewarded with a piece of armor from an upgraded version of the Mage, Serpent, or Warrior Item Sets which contain better stats and visuals. The colors in this set are exclusive to this armor, and cannot be duplicated with dyes.” I’m guessing this particular addition will be more appealing to many Elder Scrolls Online players than the Guild features.

As with any new patch, Update 3 also comes with the usual assortment of bug fixes and balance changes. For more information on this update and the full Patch Notes visit this page. Bethesda announced that Update 3 will arrive for The Elder Scrolls Online in early August. The patch was initially supposed to land sometime this month, but I guess it’s better late than never.

I’m Load The Game’s co-founder and community manager, and whenever I’m not answering questions on social media platforms, I spend my time digging up the latest news and rumors and writing them up. That’s not to say I’m all work and no fun, not at all. If my spare time allows it, I like to engage in some good old fashioned online carnage. If it’s an MMO with swords and lots of PvP, I’m most likely in it. Oh, and if you’re looking to pick a fight in Tekken or Mortal Kombat, I’ll be more than happy to assist! Connect with me by email markjudge (@) loadthegame.com only
@@MarkJudgeLTG
Previous Blackberry introduces a phone model with an unusual screen shape
Next The Samsung Galaxy Note 4 might feature the new Exynos CPU