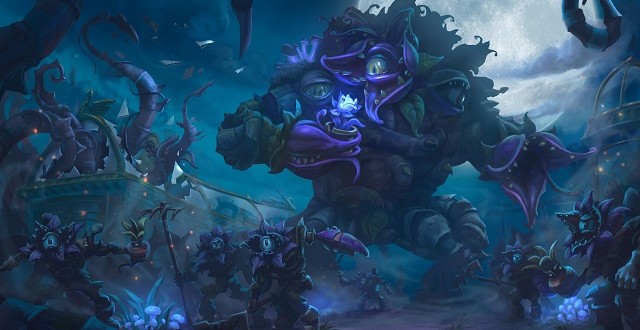 The folks over at Blizzard Entertainment just unveiled a brand new battleground for their upcoming MOBA Heroes of the Storm. Entitled Garden of Terror, this new map is a three-lane battleground that features a controllable day and night cycle. That aspect is pretty interesting by itself, but there’s much more to it than meets the eye. Senior Technical Designer Meng Song is nice enough to tell us all about it via a recent blog post. He explains that once the night sequence begins all normal mercenary camps disappear and night horrors emerge to take their place. Interestingly enough, the night sequence only ends when all the horrors are killed, which means that players can basically control the cycle and come up with interesting strategies to take advantage of the map’s low visibility during the night.

Heroes of the Storm’s latest map also has several objectives, besides just obliterating the enemy team that is. One of these objectives is to collect seeds by killing the Infested Servants found throughout the Garden of Terror. Meng explains us the benefits of doing this. “After collecting 100 seeds, any player on the team can right click on the Fertile Soil inside their base to summon the almighty Garden Terror. That player will become the Terror and will be free to use the Garden Terror’s power to their advantage. However, use your time wisely, as the summoned Terror has a time limit that will expire.”

The Technical Designer also reveals that some heroes may perform better than others on this new map. This includes junglers such as Gazlowe or Zagara, heroes with AoE like Stitches, Brightwing, and Falstad, or heroes with talents useful for scouting such as Tassadar. Meng touches upon a couple more aspects, but those were basically the highlights. It appears that Blizzard wasn’t kidding when they said that they were planning to implement features that will make Heroes of the Storm stand out from the ever increasing crowd of MOBAs. Generally speaking, you can’t really control the day and night cycle in MOBAs so this is definitely a refreshing feature. The fact that you also have additional objectives will undoubtedly make Garden of Terror a very popular battle ground in Heroes of the Storm.

The game is still in its Technical Alpha testing phase and there is no news on when the Beta will kick in, let alone a final release. Regardless, if you want to participate in the Heroes of the Storm Alpha you can sign in via your Battle.net user profile. Word on the street is that Blizzard will be sending invites soon, some of which will go to countries outside NA for the first time.

I’m Load The Game’s co-founder and community manager, and whenever I’m not answering questions on social media platforms, I spend my time digging up the latest news and rumors and writing them up. That’s not to say I’m all work and no fun, not at all. If my spare time allows it, I like to engage in some good old fashioned online carnage. If it’s an MMO with swords and lots of PvP, I’m most likely in it. Oh, and if you’re looking to pick a fight in Tekken or Mortal Kombat, I’ll be more than happy to assist! Connect with me by email markjudge (@) loadthegame.com only
@@MarkJudgeLTG
Previous Magic 2015 Duels of the Planeswalkers coming soon to Xbox One
Next iPhone 6 Touch ID sensor said to be more durable than previous model