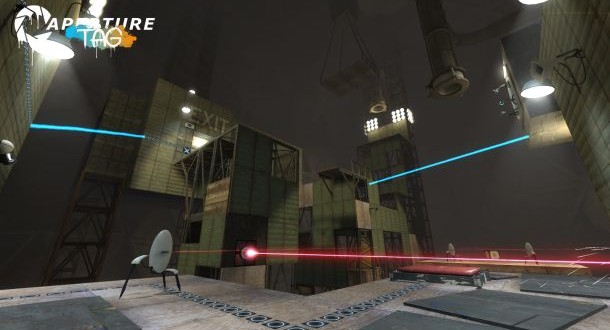 Remember the awesome bouncy gel from Portal 2? Well, now there’s an entire mod revolving around it and it was just made available on Steam. Entitled Aperture Tag: The Paint Gun Testing Initiative, this mod adds a brand new campaign to Portal 2, a new fully voiced character, 27 new maps, new soundtrack, in-game editor, and more. But the most interesting feature here is that instead of the infamous Portal Gun you get a brand new weapon with different mechanics.  As you probably guessed from the mod’s title, this new weapon is a Paint Gun that fires gel instead of portals. Below is a short description of the mod as seen on the Steam store page.

“Aperture Tag: The Paint Gun Initiative is a mod for Portal 2, inspired by TAG! The Power of Paint. The familiar Portal 2 gels are now contained within the Aperture Science Paint Gun Device and it’s your job to test it out!  Featuring a new personality-core and an original story with 27 polished levels; the mod offers an exciting and fun experience in varied and interesting new locations throughout Aperture Science.  Introducing gels as the core gameplay mechanic completely changes the way you solve puzzles, explore, and survive all the challenges thrown at you!”

Given that it’s on Steam, the mod comes with things such as Steam Trading Cards and Workshop integration for creating your own Pain Gun Maps. I’m sure many will agree that Aperture Tag: The Paint Gun Testing Initiative looks great and all, but there is a small “problem” with it. As opposed to most mods, this one doesn’t come for free. The regular price is $7, but there’s a 30% discount for one more week so you can grab it for $4,89 until then. Mods that need to be purchased are a rare sight, but the guys who made this did put a lot of effort into it and seem to have created a lot of content so perhaps the price tag is somewhat justifiable.

On the other hand, there are plenty of mods that add much more and don’t cost anything. Take Skywind for example, an ambitious project that aims to recreate the world of Morrowind and have it run on the Skyrim engine. Needless to say, both those games are absolutely huge so there’s a lot of work to be done, but the mod will be available for free regardless. I, for one, am not exactly excited that mods are starting to come with a price tag now. But this clearly has Valve backing it up so at the end of the day you’re mostly paying for the Steam benefits I suppose.

I’m Load The Game’s co-founder and community manager, and whenever I’m not answering questions on social media platforms, I spend my time digging up the latest news and rumors and writing them up. That’s not to say I’m all work and no fun, not at all. If my spare time allows it, I like to engage in some good old fashioned online carnage. If it’s an MMO with swords and lots of PvP, I’m most likely in it. Oh, and if you’re looking to pick a fight in Tekken or Mortal Kombat, I’ll be more than happy to assist! Connect with me by email markjudge (@) loadthegame.com only
@@MarkJudgeLTG
Previous Mass Effect 4 will be based on gamer feedback, featured at SDCC 2014
Next Bungie unsure if Destiny beta progress will carry over to the retail version