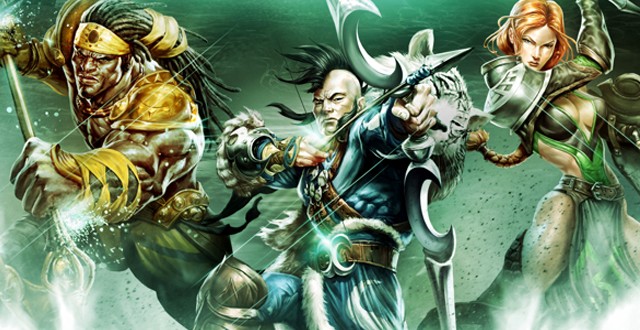 The latest Sacred 3 trailer is all about the co-op

Deep Silver just released a new action packed, humor filled trailer for the upcoming hack ‘n slash RPG Sacred 3. The video does a good job at showcasing the co-op aspect of the game, but it looks like the latest entry in the franchise is also about incentivizing players to compete against each other at the same time. You will need a strong team in order to take down the the evil empire’s hordes of enemies and I’m sure that you will want to play a key role in the battle, as will your friends. Well, Sacred 3 offers a way of knowing exactly who contributed the most to your victory by showing as scoresheet once the battle is over.

“A strong team is necessary to defeat the countless enemies of the evil empire,” Deep Silver’s Ryan Avery said. “You’ll need to equip combat arts and weapon spirits that will complement your team and your own unique play style. However, there are powerful enemies that won’t be easily slain. Combine your powers with other champions to cast devastating co-op combat arts. Once the dust from the battles has settled, the scoresheet will reveal which hero will stand as the undisputed champion over his or her peers. This establishes a delicate balance between friendly cooperation and cut-throat competition.”

After reading Avery’s description of the game, Sacred 3’s slogan “Victory is Ours. Glory is mine.” made a lot more sense. You will be able to choose between a variety of classes, each unique in their own way, and fighting together with your team is not optional. Sacred 3 is four player co-op only, but if you don’t have anyone to play with, the game will assign a trio of A.I. companions to fight at your side. Each team members can only equip a certain amount of abilities at a time so you will have to combo with your teammates in order to defeat the bosses.  Pre-ordering the game will grant you access to the blood mage champion Malakhim as well as the Underworld story DLC, Z4ngr13f weapon spirit, artbook, and soundtrack. Sacred 3 releases on August 1st in Europe and August 5th in North America, and will be available for PS3, Xbox 360, and the PC for the price of $50.

“Sacred 3 is an arcade Hack ‘n’ Slash game for up to four players, set in the war for Ancaria. Choose from legendary heroes and fight together against the rise of evil. You will face hordes of grimmocs, brute beasts, legions of mercenaries and undead wizards. Develop your character’s skills and abilities and band together to use powerful co-op abilities and tactics.”

I’m Load The Game’s co-founder and community manager, and whenever I’m not answering questions on social media platforms, I spend my time digging up the latest news and rumors and writing them up. That’s not to say I’m all work and no fun, not at all. If my spare time allows it, I like to engage in some good old fashioned online carnage. If it’s an MMO with swords and lots of PvP, I’m most likely in it. Oh, and if you’re looking to pick a fight in Tekken or Mortal Kombat, I’ll be more than happy to assist! Connect with me by email markjudge (@) loadthegame.com only
@@MarkJudgeLTG
Previous Guardians of the Galaxy game launches on Android, iOS and Windows Phone
Next Save Winston Churchill in the latest Sniper Elite 3 DLC